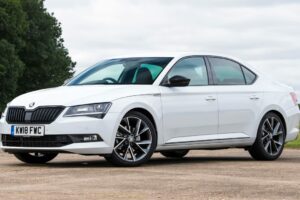 This year marks three decades since Volkswagen began its acquisition of Skoda, and it’s fair to say that since then the Czech brand – and its products – have been completely transformed. Although Skoda produced luxury cars in its distant past, before VW the focus was very much on cheap vehicles that weren’t always so cheerful.

In 1991 the idea of Skoda offering an upmarket car was unthinkable, but such was the pace of change with VW that within a decade Skoda introduced the original Superb, a stretched saloon based on the Passat platform. It proved so popular that a sequel came in 2008 (with the option of an estate), and an all-new third edition in 2015, also in hatchback or estate forms.

Initially there were S, SE, SE Business, SE L Executive and Laurin & Klement trims available, but in June 2016 a SportLine option was added, with a SportLine Plus edition following in April 2018. Upgraded infotainment and improved parking sensors were fitted to most models from May 2017, then a more complete facelift in September 2019 brought LED headlights, improved driver-assistance systems and a refreshed nose – plus Skoda’s first ever plug-in hybrid model, the Superb iV.

The 1.4 TSI engine is surprisingly perky, but the 1.5 TSI that replaced it in spring 2018 is even better. The 1.6 and 2.0-litre diesels offer more muscle with far better economy, so there are no poor choices, although the 2.0 TSI unit, while powerful, is thirsty.

Similarly the manual and automatic transmissions are user-friendly, while all Superbs are well equipped. Even the S has alloy wheels, Bluetooth and a DAB radio, while the SE adds dual-zone climate control, rear parking sensors, adaptive cruise control and power-folding door mirrors.

Alternatives to the Skoda Superb

Price-wise the Superb is pitched against large family hatchbacks and estates such as the Ford Mondeo and Vauxhall Insignia, both of which are in reasonably plentiful supply, although they don’t sell in the quantities that they used to, and neither offers the interior space of the Skoda.

If you want a car with a similarly roomy cabin, you’ll need an executive saloon or estate, such as an Audi A6/A7, a BMW 5 Series or a Mercedes E-Class – all of which cost much more to buy, and their running costs are likely to be far higher, too. The alternative is to opt for an MPV instead, such as the Ford Galaxy, SEAT Alhambra or Volkswagen Sharan, all of which are ultra-practical, great value and decent to drive.

What to look out for

All Superb variants are capable of towing between 1,500-2,000kg, apart from four-wheel-drive models, which can pull 2,200kg.

Only the 148bhp 1.4 TSI and 1.5 TSI engines have Active Cylinder Technology. This shuts down two cylinders during light engine loads to save fuel.

The Superb’s cabin is really strong, and undoubtedly one of the highlights of the car. It has huge amounts of space and a user-friendly dash, offers lots of equipment, and gives good all-round visibility, while the car as a whole is built to a very high standard.

Entry-level Superbs don’t feel quite as special and feature a fair few blanking plates around the gearlever, for example, but as you move up the range, the materials used are much improved (such as leather/Alcantara upholstery), while the infotainment screens grow in size and improve in functionality. Boot space is deeply impressive, at 625/1,725 litres for the hatch (rear seats up/down); the estate is even better at 660/1,950 litres.

Fixed servicing is every year/9,300 miles, alternating from minor to major, at £185 and £245. Or the alternative variable regime can see up to two years between services, but each is a major.

Skoda has issued eight recalls for the Superb Mk3 so far, the first of which came in December 2015 because a potentially unsecure cable clamp could lead to electrical problems. Four months later, examples of the car with a panoramic sunroof were recalled because of incorrect software, then in March 2017 faulty airbags and seatbelt pre-tensioners led to a third recall campaign.

Poorly made rear hubs led to recall number four in November 2017, then the fifth action came in May 2019, again because of airbag glitches – which was also the reason for recall seven, which was issued in February 2020. Faulty software leading to the engine stalling was behind the sixth recall, which came in September 2019; the most recent campaign came in February 2020 because eight Superbs had a faulty eCall system.

The Superb came 10th in the 2020 Driver Power new car survey, 24th in the 2019 new car survey and 13th in the used car poll that year – impressive for a car launched back in 2015. To reinforce its desirability, it gets an average 4.2 out of five with owners who have left a review on carbuyer.co.uk. Buyers love its cabin space, quality, reliability, infotainment and big boot; the lowest scores are for handling and front-seat comfort.

Skoda’s trophy cabinet is bursting at the seams with the Superb having won so many awards since it arrived. Auto Express and our sister title Carbuyer are just two of the many publications to have bestowed best-in-class status on the Superb. We named it Best Family Car in 2015, 2016 and 2017, while the Superb estate was also Carbuyer’s Best Estate Car in 2016, 2017 and 2019. There really is nothing else quite like the Superb when you take into account the equipment levels, build quality, dealer network and purchase prices on offer. With low running costs and excellent ergonomics also part of the mix, this really is a class-leading large family car in both hatchback and estate forms, which is why the Superb lives up to its name.