Home » Car Reviews » V6 Vs Straight-Six: The Pros And Cons

V6 Vs Straight-Six: The Pros And Cons 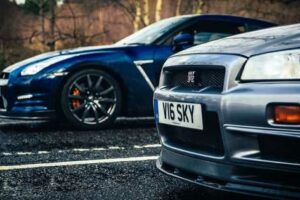 The biggest advantage however comes through engine balancing. Due to the normal firing order of a straight-six, the pistons move in-tandem with their mirror image on the other side of the engine block. So pistons 1 and 6 reciprocate, followed by 2 and 5 and finishing with 3 and 4. As pistons 1 and 6 reach top dead Centre, the other four pistons are evenly spaced at 120 degrees and 240 degrees respectively around the engine cycle, meaning that the reciprocating forces balance each other out. This makes a smooth-revving engine for which units like the S50 and RB26 have become famous.

Unfortunately, there are numerous reasons why the straight six is all but dead. Packaging has always been an issue, as the extra two cylinders when compared to an I4 means that the engine is much longer, and mounting it in a transverse configuration is very difficult. If mounted sideways, there usually isn’t enough room for the hefty transmission and drivetrain needed for an I6 in a front-wheel drive setup. With manufacturers looking to create powertrains that can be shared across as many chassis as possible, the elongated I6 just isn’t quite versatile enough.

The long engine and its components also lack rigidity when compared to a more compact engine setup. Longer camshafts and crankshafts naturally try to very slightly flex during rotation, along with the engine block lacking the stiffness of a V6 equivalent. The dimensions of an I6 also don’t help it in terms of the car’s centre of gravity, with rotating and static mass sitting slightly higher in the engine bay than other more compact engine options.

A V-configuration means the cylinders are tilted away from each other at an angle – V6s usually come in 60 or 90-degree configurations. V6s are still fairly common in numerous performance cars thanks to their versatility for a variety of platforms. Turbocharging works well in a V6 to create upwards of 500bhp, and manufacturers commonly offer twin-turbo V6 setups as an alternative to bulkier V8 engines. The Nissan GT-R R35 swapped the usual straight-six RB26 set-up used in its Skyline predecessors for a 3.8-litre twin-turbo V6. This engine is capable of 592bhp in the GTR-Nismo and more than 1000bhp in the hands of tuners.

Due to its much more stocky, compact nature, it is capable of being shoehorned into numerous engine bays within a manufacturer’s fleet, thus cutting huge costs from having to perform R&D on other engine options.

The precious space offered up by the neat package is what opens the door for forced induction, leaving room for turbochargers to nestle deep within the engine bay. Front-wheel drive setups can also utilise a V6 as a powertrain, which can lead to some truly epic performance bargains like the MG ZS180 which used a Rover KV6 and the Mazda MX-6 which squeezed in a 2.5-litre V6 in its second generation. So the V6 allowed car companies to easily produce a performance variant of their usual boring four-cylinder cars without having to drastically change chassis dimensions or engine bay organisation.

Although it may feature the same number of cylinders as its in-line brother, the V6 does not have the same intrinsic balance. Effectively made up of two in-line three-cylinders stuck together, the V-style engine needs balancing shafts that use specially placed weights to counteract the unwanted inertia created by the reciprocating engine. Without these balancing shafts, large vibrations would travel through the crankshaft and offset the efficiency of the reciprocation.

The engine balance is worsened as displacement increases (longer piston stroke) and an increase in bore size (increasing the mass of the piston). The counterweights needed therefore add complexity to the engine’s design and manufacture, increasing overall costs. Naturally a DOHC V6 must have four camshafts and potentially 24 valves in total, so the complexity of the additional valvetrain components needed to fill each cylinder head further increases the complexity of this engine setup which can make working on V6s an intimidating prospect for a less-experienced petrolhead.

Although many car guys and girls have been mourning the lack of modern straight-six engines in recent years, Stellantis group (behind brands like Dodge, Jeep and Alfa Romeo) launched a new twin-turbocharged inline-six engine dubbed ‘Hurricane’ in 2022, and the controversial BMW and Toyota collaboration saw the arrival of the Toyota GR Supra in 2019. Mazda has also debuted a new inline-six in their CX-60.

However, in the I6’s absence, the V6 has taken over and will probably continue to dominate. But with the calibre of cars utilising the V-format currently, it’s hard to complain with the performance that they can offer with few drawbacks.

Which engine format do you prefer? Do you want to see the straight-six returned to the engine bays of the current crop of performance cars? Comment below with your thoughts!