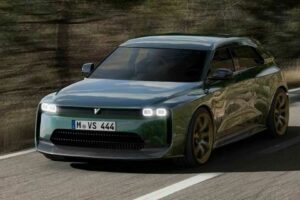 Vanwall most likely isn’t a name you are familiar with. Back in the 1950s, it was established by Tony Vandervell and Colin Chapman as one of the most successful teams in Formula 1 with Stirling Moss, Maurice Trintignant, and others behind the wheel. That company is now being revived with a motorsport division working on an FIA WEC entry, as well as an automaker that debuts its first production model. What you see in the gallery below isn’t the long-awaited Hyundai Ioniq 5 N, but the new Vanwall Vandervell.

Named after the founder of the company, the new electric hot hatch arrives in standard and Plus variants, both featuring a retro-inspired exterior design. Details such as the carbon fiber front splitter, side skirts, and rear diffuser make it look especially aggressive. If we have to name our favorite touch, it has to be that F1-inspired LED light in the middle of the rear fascia. The car rides on 22-inch wheels with low-profile performance tires.

Even though Vanwall only shares computer renderings of the new hot hatch so far, it says it has put extra efforts to make the car aerodynamically optimized with “references to the world of motorsport.” There are no photos of the interior, though the automaker claims it uses materials such as fine leather and exposed carbon fiber. The first available performance numbers, however, are pretty impressive.

The standard Vanderwell S has an electric powertrain with 320 horsepower (235 kilowatts), which gives it a 0-62 miles per hour (0-100 kilometers per hour) acceleration in just 4.9 seconds. This less powerful model can travel up to 280 miles (450 kilometers) on a single charge, though there are no details available about the battery. The Vandervell S Plus, in turn, has a 261-mile (420-km) range but a significantly more powerful 580-hp (432-kW) electric drive system. Both versions have all-wheel drive and the Plus model accelerates to 62 mph (100 kph) in 3.4 seconds.

Vanwall says it will assemble just 500 examples of its first production road-legal model, which will be sold through direct sales and distributed by delivery partners. The first deliveries are scheduled for the third quarter of this year to those willing to pay the “extremely competitive price” of €128,000 or around $138,500 with the current exchange rates.