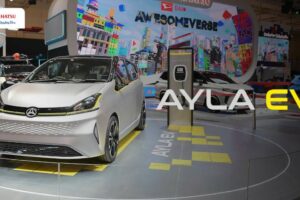 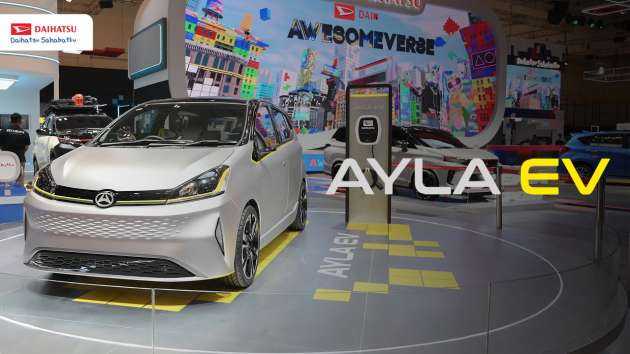 Unveiled at the Gaikindo Indonesia International Auto Show (GIIAS) 2022 in August, the Daihatsu Ayla EV Concept has been given a video walkaround tour courtesy of the Daihatsu Sahabatku YouTube channel at the brand’s show stand.

Here, the video host begins the tour of concept EV hatchback along its exterior, where the Ayla EV Concept’s front end wears a full-width LED strip passing through its central logo, somewhat akin to that of the Mk8 Volkswagen Golf, along with a yellow strip that is also full-width and which is joined through the headlamps as well.

There’s another VW-esque aesthetic here on the Ayla EV Concept’s front fascia, where the array of ‘parametric pattern’ shapes echo those of the ID.3. Along each side of the concept is another yellow strip that outlines the lower edges of its glasshouse, adding visual interest along with the two-tone scheme offered by the black roof and pillars.

Through the windows, the interior can also be seen with seatbelts in the same bright hue. Another distinct feature of the Ayla EV Concept’s exterior is its set of exterior cameras were conventional mirrors would typically be, offering the driver rearward vision through a video feed monitor on each side. 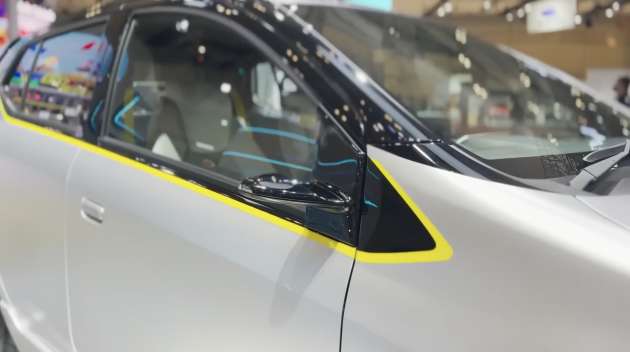 Continuing along the exterior, rolling stock for the Ayla EV Concept is a set of 17-inch wheels, which also brings neon yellow accents to its two-tone machine finish.

Along the top of its tailgate is a spoiler finished in black to match the car’s roof, and this too receives the neon yellow highlight on its trailing edge that connects the yellow strips from the lower edge of the window lines on each side.

Entry to the Ayla EV Concept’s interior is via door handles from the production ICE-powered Ayla, and driver instrumentation is provided by a seven-inch digital display. Here, the neon yellow highlights can also be seen to outline the surrounds of the air-conditioning vents and the start-stop button, while transmission control is via a rotary selector.

Seat upholstery as observed by the presenter is of a leather and Alcantara combination, here trimmed in a light colour. Moving rearwards, the rear doors of the Ayla EV Concept appear shorn of the production model’s door handles, and some additional concept-car flair is added here; the rear upturned edge of the window line houses a touch sensor on the rear door that will unlatch the door release.

Compared to this concept built by Astra Daihatsu Motor at its R&D centre in Indonesia, the Low Cost Green Car (LCGC)-classified internal-combustion Ayla is powered by a 1.2 litre 3NR-VE four-cylinder petrol engine mated to either a five-speed manual or four-speed automatic.

Even though a productionised Ayla EV, and by extension a Perodua Axia EV is unlikely for now, it does indicate that battery-electric models are in the companies’ long-term plans. Would you buy one, and what would you be willing to pay for it?