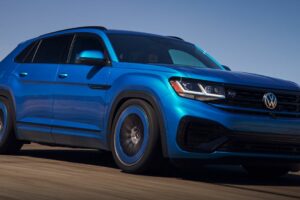 The launch of the latest Volkswagen Golf GTI and Golf R in the United States left quite a mark on Volkswagen of America, as the company decided to take one of its SUVs and stuff it with as much performance parts it can lay its hands on.

The result is this, the Atlas Cross Sport GT Concept, which is the company’s latest enthusiast build for 2021. “The launch of the all-new Golf GTI and Golf R got us thinking about how to inject some of that VW magic into our SUVs. This concept is proof that it’s possible to build SUVs that could appeal to our performance enthusiast base,” said Scott Keogh, CEO of Volkswagen Group of America.

Modified by Volkswagen enthusiast Jamie Orr, the show car is based on a regular Atlas Cross Sport, specifically in SEL Premium R-Line trim. The first order of business is the striking Eisvogelblau blue exterior, which was hand painted by a team from the Chattanooga assembly plant where the Atlas Cross Sport and its Atlas cousin are built. The colour’s name translates to “Kingfisher Blue” and it is currently available on selected Volkswagen products sold in Europe. Adding to this are exterior trim pieces finished in black, including on the sills, front grille, aprons, tailgate and roof rails, rather than the usual chrome, plus custom GT badging.

It’s not all show and no go either, as the default EA390 3.6 litre naturally-aspirated V6 engine has been swapped out for an EA888 2.0 litre TSI turbocharged four-cylinder found in the new Golf R. The company didn’t go into specifics, although it did say there is an IS38 turbocharger and an additional front-mounted radiator from the previous Golf R Mk7 in play.

The end result is “more than” 300 hp, which is more than the stock motor’s 276 hp, with drive transmitted to the ground via a seven-speed DSG dual-clutch transmission (replacing the eight-speed automatic) and 4Motion all-wheel drive system.

On the inside, the five-seat layout has been replaced with a four-seat configuration featuring bespoke Recaro Sportster CS seats, with an additional centre console in the rear. To match the exterior, the Eisvogelblau colour is used for some of the seat inserts as well as on the custom gear knob, parts of the door cards, safety belts and floor mats.

“I have had the opportunity to drive standard production Atlas Cross Sport vehicles in a variety of different conditions and environments, which has proven to me what a capable platform it is. The production model has excellent acceleration, braking, and handling for its size, but I knew we could build a car that could maximize its potential and live up to the GT name. It’s been a lot of fun creating this concept. Hopefully, it’ll get a smile out of people,” commented Orr.