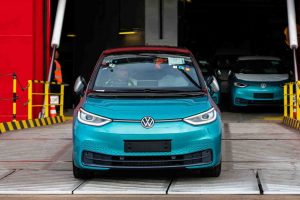 Rollout of the Volkswagen ID.3 line-up picks up pace with new 145bhp ‘Pro’ motor cars bringing the starting price down for the electric hatch

Volkswagen has expanded the ID.3 line-up in the UK with the arrival of a less powerful electric motor option, which brings the base price of the firm’s all-electric family hatchback down to £28,670 after the £3,000 government plug-in car grant.

All versions of the ID.3 in entry-level Life trim, along with Business and Family equipment levels, can now be had with a 143bhp electric motor instead of the 201bhp option offered to customers up to now.

Both the 143bhp Pro and 201bhp Pro Performance cars use a 58kWh battery pack and feature 100kW DC charging capability. It means charging from 5 per cent to 80 per cent on a 100kW rapid charge takes 35 minutes, and depending on trim level, the ID.3 will cover between 258 and 263 miles on a charge (based on WLTP testing data).

The only key difference between the two motors is acceleration. Pro models take 9.6 seconds from 0-62mph, Pro Performance cars cover the sprint in 7.6 seconds. Both have a top speed of 99mph.

Each of the ID.3’s seven trim levels is fitted with a range of equipment packages: Design, Infotainment, Comfort, Assistance and Sport – each with slightly more comprehensively equipped ‘Plus’ variants.

In Life trim, the ID.3 offers a standard kit list that includes 18-inch alloy wheels, LED headlights, adaptive cruise control with lane assist, and parking sensors all round. In addition to this, it gets natural voice control inputs and Volkswagen’s Car2X system, which can communicate with other Car2X-equipped vehicles to warn the driver of upcoming hazards.

Life also gets the Infotainment package – a 10-inch touchscreen infotainment system with satellite navigation, Bluetooth and smartphone connectivity – plus the Comfort Pack, which includes electrically folding door mirrors, an auto-dimming rear-view mirror, heated seats and a heated steering wheel. The interior is trimmed in black cloth.

Above Life sits the £32,400 Business trim (£33,720 for the 201bhp motor). This adds to the entry-level spec with the Design and Assistance packs. The former brings matrix LED lights, animated LED tail lights, rear privacy glass and interior ambient lighting, and the latter includes a rear-view camera, keyless entry and illuminated door handles.

Next is the Style model, priced from £34,180 and only available with the 201bhp motor. This features the Infotainment and Comfort packs, but also gets the Design Plus pack, which adds a panoramic sunroof. It does, however, do without the Assistance pack.

The Family trim now straddles the Style equipment line with the 143bhp Pro motor model priced from £33,330, and the 201bhp Pro Performance car starting from £34,650. It features the Design Plus, Infotainment and Assistance packs. An upgrade to Comfort Plus introduces two-zone climate control and a variable boot floor.

The £36,190 ID.3 Tech gets the standard Comfort Pack, with Design Plus and Assistance Plus. It’s the first trim level to offer the Infotainment Plus pack, which features an uprated sound system and a head-up display with augmented reality animations.

The ID.3 Max, meanwhile, gets Plus versions of the Comfort, Design, Assistance and Infotainment packs. It also adds electrically adjustable front seats with a massage function, and introduces the Sport Package; adding progressive steering and sports suspension to the equipment list (a Plus version of the Sport Pack will be available at a later date, and includes adaptive dampers). The Max is priced at £38,220.

The final trim level is Tour. This sits at the top of the range at £39,290, and gets a larger 77kWh battery pack which means the ID.3 can cover 336 miles between charges, according to VW’s claims.

The heavier battery dulls performance slightly – 0-62mph takes 7.9 seconds – but a faster 125kW charging system means that the larger bank of cells takes only slightly longer to top up: a 5-80 per cent replenishment takes 38 minutes.

The Tour model is equipped with the standard Design pack, and Plus versions of the Infotainment, Comfort and Assistance packs, and adds 19-inch alloy wheels and electric front seats.

Buyers can further customise their ID.3 with a choice of six exterior colours. All models get a contrasting black roof and boot lid, while the C-pillar can be finished optionally in either a silver or copper hue.

Different wheel designs up to 20-inches in diameter are available across the range. Three interior colour schemes are offered: white and black, white and orange or all black.

A further powertrain option will arrive in 2021, lowering the price of the ID.3 once again. Exact specifications will be revealed later this year, but VW has confirmed that the ‘Pure’ powertrain will use a smaller 45kWh battery, likely with the 145bhp motor. Expect a usable range around 205 miles and a price tag closer to £26,000.

The ID.3 marks the debut of the VW Group’s all-new MEB platform – a bespoke, rear-driven, pure-electric platform that will soon underpin dozens of electric vehicles from Volkswagen, SEAT, Skoda and Audi.

Despite the current sub-£30,000 start point, we expect a cheaper version with a less potent powertrain to follow. A future entry-level ID.3 Pure will feature a 145bhp electric motor and a 45kWh battery, for a range of roughly 205 miles. Unlike the higher models’ 100kW charger, the base model will get a slower 50kW charger to help keep the price down.

Late last year, Volkswagen also confirmed it was “actively considering” a high-performance version of the ID.3. It’ll feature the same MEB platform as the standard car, but it’ll come with a more potent electric drivetrain and an uprated battery pack, designed using the expertise gained from the ID.R racer project.

Regardless of output, Volkswagen guarantees that the ID.3's batteries will retain at least 70 per cent of their usable capacity for eight years or 160,000km (around 100,000 miles). Frank Blome, Head of Volkswagen's Centre of Excellence in Salzgitter said: “Our goal is to make sure the batteries last as long as the cars.

From the outside, the ID.3 sticks close to the concept that made its debut at the Paris Motor Show back in 2016. The cute headlights remain, along with the “honeycomb” motif along the front bumper and the black tailgate is also still present; this final element is destined to be an ever-present design cue on ID.3s.

The most noticeable change comes in the side profile, where Volkswagen has had to fit a longer bonnet to comply with pedestrian safety regulations. However, the company’s design team, led by Klaus Bischoff, has added a black plastic panel under the windscreen to trick your eye into believing the bonnet is shorter than it actually is.

The car is 4,261mm long and 1,809mm wide – so just 23mm longer and 20mm wider than the new Mk8 Golf – but the ID.3’s wheelbase is a full 145mm longer than the regular family hatchback’s, at 2,765mm. The new arrival’s roofline does sit around 60mm higher than the Golf’s, however – a clue that the battery installation has resulted in a slightly thicker floor.

The differences from the concept are more pronounced inside, where the ID.3 drops the show car’s retractable steering wheel and features a more mainstream choice of materials and finishes. The design is clean and uncluttered, though, and information is displayed on a digital “pod” instrument panel. The gear selector is a rocker switch mounted on the side of this – a layout that will be familiar to anyone who’s driven a BMW i3.

The 10-inch central screen is standard across the range, and it features touch-sensitive controls for the air conditioning and stereo, in place of physical dials. Volkswagen’s “intelligent natural voice control” system will also feature, as will smartphone connectivity.

Volkswagen’s design team has used the extra floor space to create plenty of cubbyholes and a central storage bin between the front seats. But, the smartest trick in the cabin is delivered by that long wheelbase, because the knee- and leg-room in the rear looks on par with a Passat, rather than a Golf. There’s no great compromise on boot space, either. At 385 litres, the ID.3’s capacity isn’t at the peak of the family car class, but it’s more than acceptable.

What does the new Volkswagen ID.3 have to beat? These are the best electric cars on sale right now…