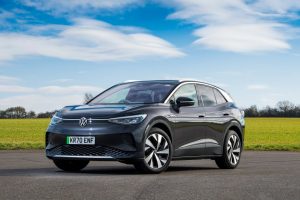 Volkswagen’s new all-electric ID.4 SUV has been named World Car of the Year for 2021

The ID.4 is Volkswagen’s second all-electric model sitting on the brand’s new MEB platform (following the ID.3 hatchback) and came out on top following voting by a jury of 93 international jurors from 28 countries, including Auto Express editor-in-chief Steve Fowler and chief columnist Mike Rutherford.

Ralf Brandstätter, Volkswagen Cars CEO, commented: “We are particularly pleased about our ID.4 being named World Car of the Year. Not only because it is one of the most important car awards in the world – but because the jury also honoured a great idea and a great team. The first ID. model for the key markets of Europe, China and the U.S. carries our electric offensive around the world. A convincing car, a great idea – and the World Car of the Year award? That goes well together for us!”

Among the other World Car winners, there was British success with Land Rover’s new Defender named World Car Design of the Year for 2021. Accepting the award, JLR Chief Creative Officer Gerry McGovern, said, ““New Defender is influenced by its past but is not constrained by it and we are delighted it has been honoured with this award.

“Our vision was to create a 21st century Defender by pushing the boundaries of engineering, technology and design while retaining its renowned DNA and off-road capability. The result is a compelling 4×4 that resonates with customers on an emotional level.”

2020 World Car of the Year winners

Despite being a US-only model, the Kia Telluride impressed the World Car of the Year judges (including Steve Fowler and Mike Rutherford) enough to walk off with the overall title for 2020.

In a double success for Kia, the Soul EV took the award for the best Urban Car, beating the MINI Electric and Volkswagen T-Cross.

Which car do you think will win the prestigious title? Let us know in the comments below…