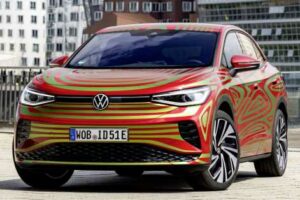 Volkswagen has announced that the all-electric ID.5 GTX coupé-SUV will be making its debut – albeit as a disguised “near-production concept” – at the coming Munich Motor Show this September.

Its GTX suffix denotes its positioning as a performance variant of the ID.5 in the vein of GTI, GTD and GTE badging for the brand’s petrol, diesel and plug-in hybrid models respectively, says the automaker. Here, the ID.5 GTX boasts of two electric motors, one on each axle for all-wheel-drive, and its lithium-ion battery offers a range of up to 497 km.

The German automaker still has yet to release specific technical details for the ID.5 GTX, though this model can be expected to yield similar numbers as from the ID.4 GTX, which include a total systems output of around 299 PS (295 hp) from its dual-motor setup. Using its ID.4 GTX sibling as a reference, the 77 kWh battery yields 480 km of range in the longer-roofed SUV. Acceleration by the ID.4 GTX over the 0-100 km/h benchmark is 6.2 seconds, and a limited top speed of 180 km/h. The ID.5 GTX is expected to boast similar battery charging numbers as the ID.4 GTX, which supports AC charging at up to 11 kW and DC charging at up to 125 kW, which will offer a top-up of 300 km from around 30 minutes of charging.

For comparison, the regular ID.4 SUV made its debut last September with a single rear-axle mounted drive motor rated at 204 PS, which propels the SUV from 0-100 km/h in 8.5 seconds an onwards to a top speed of 160 km/h.

Elsewhere in the ID.5 GTX, Volkswagen says the upcoming electric coupé-SUV is “fully connected”, and can receive over-the-air software updates and will be equipped with Car-to-X technology. This enables the vehicle to communicate with infrastructure around it, thus becoming able to receive alerts to situations such as traffic congestion and hazards, such as approaching emergency services and broken-down vehicles.