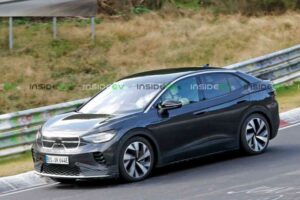 Volkswagen is still testing camouflaged ID.5 prototypes with a faux Subaru grille, this time our spies caught one being driven quickly around the Nurburgring Nordschleife. The ID.5 is expected to be fully revealed soon, and we already got to see a lightly camouflaged prototype at the German motor show this year, as well as the explore the GTX version of the more practical ID.4.

The differences between the ID.4 and ID.5 will be limited to the different roofline and rear end, as well as some minor detail changes. It will mostly be the same vehicle and the only areas where the ID.5 won’t be quite as good as the ID.4 are rear headroom and cargo carrying capacity – the ID.4 is excellent on both counts, so losing some space shouldn’t be a tragedy.

It’s also interesting to note that all crossovers currently being built on the VW MEB platform will get both versions: a more traditional SUV shape, as well as a more fastback-like coupe version. Interestingly, the first of these vehicles to get both versions on the market is also the newest one, the Audi Q4 E-Tron (already available as a Q4 E-Tron Sportback model).

The next one to be fully revealed is the ID.5 and it will be followed by the coupe-like version of the Skoda Enyaq. All these vehicles will have the same specs, same batteries and more or less the same performance and efficiency figures. Having driven all three of them, I can safely say they actually do have their own character and feel different on the road, so this is more than an exercise in badge engineering.

The ID.5 GTX will get the same dual-motor powertrain as the Audi Q4 E-Tron 50 model, so it will have 299 horsepower and be able to sprint to 100 km/h in a little over 6 seconds. Its battery will also be the same 82 kWh pack with 78 kWh usable capacity and the range should also be similar, rated at just shy of 500 km (310 miles).