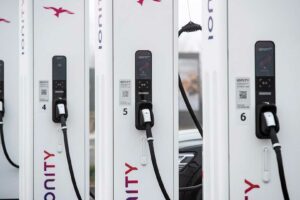 “This is anything but a premium charging experience, IONITY!”

Volkswagen Group’s boss Herbert Diess has responded to a LinkedIn post, sharing his not too good charging experience at the IONITY fast charging network in Europe.

You may recall that IONITY was founded by BMW Group, Daimler AG, Ford Motor Company and the Volkswagen Group through Porsche AG, with Hyundai Motor Group also joining later.

It’s not only the size of the network that’s lagging; Herbert Diess points out that the stations are lacking in other areas, including reliability and restrooms.

“But: Too few charging points on the burner! Only 4 – of course, everyone stops at the shopping center. Occupied. So continued to Trento. Even after the criticism last year: no toilet, no coffee, a column except for operation / defective, sad affair. This is anything but a premium charging experience, IONITY!” – via Google Translate

That should explain why Volkswagen Group is heavily investing in the fast charging infrastructure in Europe with other partners like BP or recently with Enel X (Italy).

It appears that the IONITY network is at the crossroads right now as it will have to secure more investments from the founders to improve and expand. But will they be willing to invest or just seek opportunities elsewhere?

Info about the IONITY network: