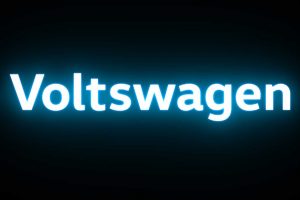 It’s a little early for April Fools, isn’t it?

Volkswagen of America is no more. No, it hasn’t filed for bankruptcy, but you are now expected to refer to the same company as Voltswagen, believe it or not, according to a recent press release published by the German giant. And no, we know March 30 isn’t the first day of April, known for jokes and shenanigans, so this piece of news is 100 percent real and official.

We too thought it was a joke, as many people even in the comments below our articles about electric Volkswagens often came up with variations of the formula. We’re not sure where VW got the idea – it may have been from one of our dear readers’ comments – but Voltswagen is now the official name.

Still don’t believe us? Check out VW.com, then, and you will see that all mentions of Volkswagen have been replaced with Voltswagen. And with the reference to volts, you’d think the name would only be applied to the automaker’s electric offerings, but no – the Jetta, Atlas, Tiguan, Touareg are all Voltswagens now.

You don’t even need to read the press release to understand why the company took this frankly quite bold and unusual rebranding decision. It wants to be perceived more as a manufacturer of electrified vehicles, and to try to help Dieselgate be forgotten – the company’s image suffered massively as a result of that scandal and it has probably not fully recovered to this day, but it’s slowly changing as the manufacturer launches more dedicated EVs, like the ID.3 and ID.4.

Officially, the president and CEO of Voltswagen of America Scott Keogh, explains that

We might be changing out our K for a T, but what we aren’t changing is this brand’s commitment to making best-in-class vehicles for drivers and people everywhere. The idea of a people’s car is the very fabric of our being. We have said, from the beginning of our shift to an electric future, that we will build EVs for the millions, not just millionaires. This name change signifies a nod to our past as the peoples’ car and our firm belief that our future is in being the peoples’ electric car.

We wonder if this rebranding will be applied to the rest of the company in the not too distant future. Now that they’ve done it for their US business, it’s by no means a stretch to see it  become a companywide change. So far no announcements have been made outside VW’s US sites, but it’s definitely not out of the question in the future.