Volvo EX90 To Debut November 9 As Brand's Safest Vehicle Ever 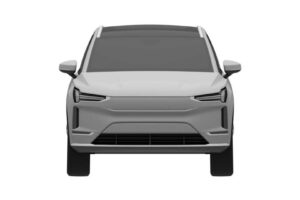 Volvo Cars finally has a name for its upcoming electric flagship SUV and a debut date: it will be called the EX90 and will be unveiled on November 9 as the brand’s safest vehicle ever.

Unfortunately, the automaker hasn’t started teasing the vehicle’s design yet, although that is not exactly a secret after a set of patent images surfaced last month. In a press release that details the EX90’s safety features, Volvo says the vehicle will surpass any of its models in this field.

“The standard safety in the EX90 will be beyond that of any Volvo before it (…) The EX90 is the start of a new era for Volvo Cars, taking our legacy of safety, quality and innovation into the future.”

Key to the Volvo EX90’s safety prowess will be state-of-the-art sensors including LiDAR, eight cameras, five radars and 16 ultrasonic sensors, all powered by the company’s core computing platform and software. All these systems will work together to create a 360-degree real-time view of the world, according to Volvo.

Supplied by Luminar, the LiDAR sensor embedded in the vehicle’s roofline is a first for the brand. It can detect pedestrians at distances of up to 820 feet (250 meters) even at highway speeds. Plus, since it’s not reliant on light like a camera, it’s equally effective day and night.

“Our sensors don’t get tired or distracted. They are designed to respond and react when you’re just a millisecond too late. Our LiDAR senses the road in front of you, whether it’s day or night, also at highway speeds. It can see small objects hundreds of metres ahead, creating more time to inform, act and avoid.”

Volvo Cars’ research indicates that its software and sensors can help reduce accidents that result in serious injury or death by up to 20 percent. Furthermore, the company estimates it can even improve overall crash avoidance by up to 9 percent, potentially leading to millions of accidents avoided over time.

By observing the driver’s eye-gaze patterns, measuring how much of the time the driver looks at the road ahead and monitoring steering behavior, the system understands when the eyes are focused somewhere else.

If the system detects that the driver is not alert, it starts emitting a warning signal that becomes louder based on the severity of the situation. If the driver doesn’t respond to the warnings, the car can even safely stop by the side of the road, turn on the hazard lights and call for help.