Home » Car Reviews » Volvo to introduce B5, B6 petrol mild-hybrids in the US – paultan.org

Volvo to introduce B5, B6 petrol mild-hybrids in the US – paultan.org 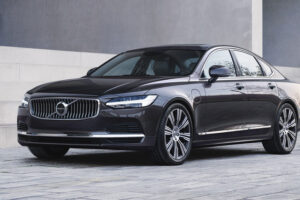 Two years on from Volvo’s global revealing of its 48-volt mild-hybrid petrol and diesel powertrains, the B5 and B6 variants will be entering the United States market in selected models, according to Car and Driver.

Models that will feature the mild-hybrid powertrains for the 2022 model year in the United States include the S60, XC60, S90 and V90 Cross Country, and all of these will each continue to employ a 2.0 litre inline-four engine that features either turbocharging or a combination of a supercharger and turbocharger.

The S60 and XC60 are offered in the US in B5 guise, while the S90 sedan and V90 Cross Country estate will be powered by a mild-hybrid twincharged (supercharger and turbocharger) petrol, badged B6 as standard. The XC60 SUV can be specified in the US as either a B5 or B6. For now, it appears that the XC90 flagship SUV will not receive the mild-hybrid powertrains just yet.

Volvo has yet to reveal the US-market specifications for these engines, and these could be different from the outputs of the T5 and T6 petrol engines of the versions currently on sale in the US. For reference, the T5-specification turbocharged 2.0 litre inline-four powertrain for Europe makes 250 hp PS and 350 Nm of torque, while the T6-spec twincharged engine produces 300 hp and 420 Nm of torque.

In Europe, models with mild hybrid electrification can be specified as either petrol or diesel versions in B5 guise, while the B6 powertrain is petrol only. The B5 versions can be paired with either front- or all-wheel-drive, and in diesel guise produces 235 PS and 480 Nm of torque. The XC60 also gets a smaller-capacity B4 diesel mild-hybrid.