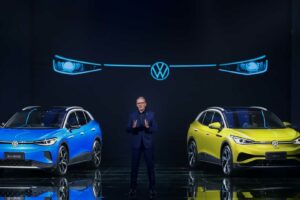 Volkswagen’s ID.4 electric vehicle has had a slow start in China, with sold just over 1,200 sales in the model’s first two months on the Chinese market; by contrast, Tesla sold more than 6,000 units of the Model Y two months after launch.

There are many theories trying to explain why the ID.4’s is underperforming. One of the most unusual comes from Stifel analyst Daniel Schwarz, who believes that VW employees dress too conservatively compared to staff from competitors like Tesla and Nio.

Yes, you read that right, and no, this theory did not come out of the blue. Schwarz came to this conclusion after Stifel dispatched mystery shoppers to VW, Tesla, and Nio stores.

According to the analyst, the experience in Volkswagen’s dealerships was very different, as the staff were dressed very conservatively and were not as energetic as those in the Tesla and Nio stores.

“Clearly, the dealerships at VW look older than at Tesla or Nio. The sales personnel at Tesla/Nio are younger and perceived as ‘more energetic and more confident’ than VW’s sales personnel— the mystery shoppers were stressing this very much, also that it influences the buying decision.”

To back these claims, Schwarz included a photo that shows a VW salesman in a tie, compared with the more relaxed Tesla and Nio sales staff. While that may oversimplifying things, the fact remains that younger customers may feel more at ease in the company of salespeople who dress in a more relaxed manner. For some buyers, the more conservative dress code could also send the message that legacy automakers are more rigid and stuck in their old ways.

However, Schwarz added that VW knows it needs to improve in China, and the company is adding new locations. In a July 29 earnings call, VW Group China’s CEO Stephan Wollenstein said that the VW brand is aiming for a network across both joint ventures (FAW-VW and SAIC-VW) of roughly 150 such prime locations in high-frequency areas in China, where its competitors are also now presenting their cars. He also said that would give VW a similar-sized network to NEV-only brands.

They might be another reason for the ID.4’s underperforming sales, though. In China, the number 4 is associated with death because it has almost the same pronunciation in Mandarin as the word “death.”