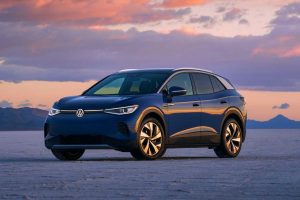 According to some observers, the all-electric VW ID.4 SUV could be a real threat to the Tesla Model Y.

While Tesla has been a trailblazer in the electric vehicle space, legacy car companies have been laggards to date. That’s about to change. One automaker everyone is hoping lives up to its promises is Volkswagen. And according to some observers, the German automaker’s all-electric ID.4 SUV could be a real threat to Tesla’s Model Y. Wall Street Journal auto columnist Dan Neil recently weighed in on the showdown.

After driving VW’s ID.4, Neil says, “Compared to this light-footed, sweet-singing creature, gas-burning competitors feel like puttering, muttering nincompoops.” Good to hear — it would be great to see the ID.4 replace a few gas-mobiles out there. But can it take away sales from Tesla?

Ummm, not so much. “So when I say the ID.4 is five years behind the comparable Tesla, it’s not because I’m an Elon fanboy, a VW hater, or that I have anything to gain or lose personally. That is my best guess, based on my weeklong test drive of VW’s hot-from-the-oven, slightly underbaked strudel,” writes Neil.

That said, from a looks standpoint, Neil gives the nod to the ID.4. “With its sloe-eyed canopy and high-cut hips, optional LED-illuminated nose and 20-inch alloy Spirographs, the ID.4 is not without curb appeal,” he says. And, “the ID.4 can afford the luxury of a full-length glass roof. It’s pretty spectacular.”

The tech, however, is another story. According to Neil, the VW ID.4’s “12-inch center touch screen takes ages to boot up and can lag behind user inputs. It’s not very pretty, either. The ‘Car-Net’ phone app—a Tesla-like remote interface with the car, accessing charging and climate functions—failed to talk to the car when I tried it several times.”

On the other hand, Neil observes, “Tesla’s displays respond at the speed of thought and their mobile IT is coded by the fiery finger of God.”

Okay, so what about interior space? “With the rear seat backs folded, the cargo space measures 64.2 cubic feet, comparable to a Tesla Model Y. But surprisingly, unlike the Y… the ID.4 has no front trunk.” Neil also notes, “There is a lot of wasted space in the package around and below the roof (the “A”) pillars” inside the ID.4.

When it comes to VW’s sub-par range and acceleration numbers, the vehicle’s weight just might play a role. Neil points out “ID.4’s less-than-optimized curb weight: 4,600 pounds. That is quite a lot, some 200 pounds heavier than a Model Y with two motors. I infer from the ID.4’s anvil-like density that the team ran out of time. Development engineers always say cutting mass is the hardest part.”