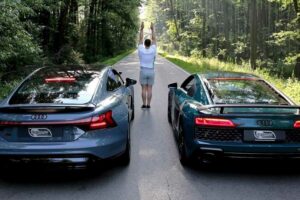 The hot version of the all-electric Audi sedan had no problem keeping the R8 in its rear view mirrors.

People drag race ICE vehicles against EVs, even though they know the electric car is usually quicker. But even after hundreds upon hundreds of EV versus ICE drag races, the internet can’t seem to get enough of them, which is why you’re here watching this one pitting the brand new Audi RS E-Tron GT against the brand’s famed V10 supercar, the R8.

Now granted, this particular race did not have a foregone conclusion. The two vehicles are reasonably well matched on paper: the E-Tron makes 646 horsepower, while the R8 makes 620 horsepower but is also lighter. The electric car makes up for its extra weight with torque – 830 Nm (613 pound-feet) versus 580 Nm (428 pound-feet).

When it comes to claimed 0 – 100 km/h (0 – 62 mph) times, both the E-Tron and the R8 do it in exactly the same 3.3 seconds. However, in real world conditions, the electric car still jumps off the line quicker than the supercar, and it keeps its lead for the entire quarter-mile drag race. The RS E-Tron GT has been independently recorded accelerating to 100 km/h in under 3 seconds.

If the race was longer, than perhaps the R8 (whose speed is over 200 mph) would have started to close the gap and possibly pass the E-Tron GT, but in this 400 meter dash, the big V10 didn’t stand a chance. Surely a race between the lower-powered E-Tron variant, with 522 horsepower, and the same R8 might have yielded a different result.