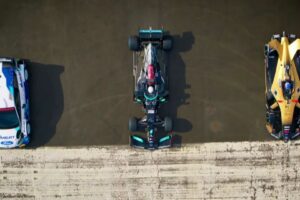 The World Rally Championship, Formula One, and Formula E are among the top forms of motorsport in the world. Top Gear was able to collect a vehicle from each of these series for a drag race to see which one was the quickest in a drag race.

Specifically, the WRC machine is a Ford Fiesta. The Formula E car is from the DS squad. Finally, the F1 racer comes from Mercedes-AMG, so this isn’t a vehicle that would be running at the back of the pack in a grand prix.

It’s worth noting that the runway is wet for this drag race, and the Fiesta WRC’s all-wheel-drive system has a distinct advantage in these conditions. The Ford takes a big lead off the line, but that doesn’t last.

The Mercedes-AMG F1 car then rolls into the lead and never gives it up. On the wet runway, the tires kick up tall rooster tails of water.

The DS Formula E machine finishes last. The EV is never a real challenger in the drag race. It sort of looks like the vehicle is gaining on the Fiesta WRC, but there would need to be a lot more track to make the pass. This also makes sense because rally cars tend to have shorter gearing because a high top speed is not a priority when negotiating a tight, off-road stage.

The Top Gear guys are very excited by the spectacle of the race. Although, we’d love to be standing so close to this trio in a drag race, too. The sound of them from just a few feet away must be astounding.

On a dry track, we’d expect the results to be similar. The F1 car might win by a larger margin, but the all-wheel-drive WRC machine would still probably beat the Formula E racer.