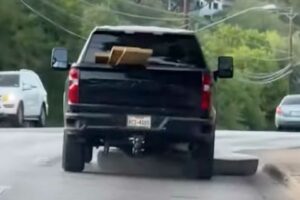 On average, you have 41 million minutes to live. That’s a huge amount of time if you think about it and there’s a huge chance you’ll witness something odd within that timeline. For the person who captured the video above, this was one of those moments.

In a video submitted to ViralHog, one driver saw something unusual going on with the vehicle in front of them. The truck, which appeared to be a Chevy Silverado HD, has been dragging something underneath.

To make matters worse, the driver of that truck was oblivious to what was happening outside, failing to notice that there was a foreign object tucked in between the front and rear axles. That foreign object appears to be a mattress and according to the video submitter, the truck dragged it for two miles before making a turn into a neighborhood.

The owner of the video also made some investigating and later found out on a Reddit thread that the truck driver actually tried to maneuver around the mattress from three miles back. A commenter on the uploaded video also argued that it wasn’t a mattress but whatever it was, it definitely didn’t belong there.

People (supposedly) buy pickup trucks for their versatility and capability to haul lots of stuff, more so on heavy-duty trucks like the Silverado 2500 HD. Little to everyone’s knowledge, that massive pickup can also haul stuff underneath. Extended storage, maybe?

Kidding aside, we’re just glad that this ordeal didn’t result in any accident or anything related to safety. For high-riding vehicles, going over this mattress or any object shouldn’t be a problem, but imagine this object sliding at speed onto a low-slung vehicle in the opposite lane. That wouldn’t have been a pretty sight, we reckon.

That said, let this serve as a reminder to always be aware of what’s going on in, around, and underneath your vehicle. You’ll never know what you already have in tow, like in this case, a potential danger to everyone else on the road.