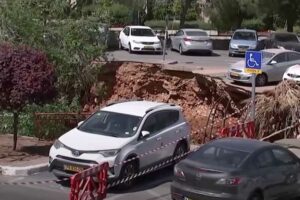 Thankfully, nobody’s injured in the incident.

Out of all the vehicular accidents that could ever happen, sinkholes are probably the most terrifying. There’s nothing scarier than the ground literally swallowing your car whole, especially if you’re inside the vehicle when it’s happening.

Thankfully, no one had to experience that in a sinkhole incident that happened in Israel, Jerusalem. Caught on tape, which you can watch in the video embedded on top of this page, the incident took place at the parking lot of Shaare Zedek Medical Center in Jerusalem in the afternoon of June 7, 2021, Monday.

Weirdly enough, while most of the sinkholes we’ve seen before happened amid inclement weather, like this one that happened in China, this one occurred on a dry, sunny day.

The security footage above was distributed by the hospital itself, showing a number of cars falling into the collapsing ground. Several videos have also gone viral on various social media platforms, taken by bystanders that were present while the incident was happening. The video atop this page was posted by Global News on YouTube.

According to reports, the sinkhole is near a tunnel construction, which coincidentally runs underneath the hospital and the involved parking lot.

Reports stipulate that the authorities are now investigating the incident, checking if the tunnel construction has anything to do with the sinkhole.

The parking lot had around 50 cars around when the sinkhole suddenly appeared, involving at least three vehicles. The police had to block the roads and the surrounding areas, while a special rescue team helped in the search and intended rescue to check if there were any people trapped among the vehicles devoured by the ground.

Thankfully, Israeli police reported that there weren’t any injuries or deaths involved in the said sinkhole incident.