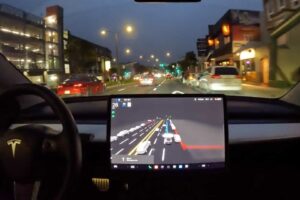 If you live and drive in a city which allows cars to be parked parallel to the road (which is pretty much any city), then chances are you have swerved to avoid the odd parked car door opening suddenly in front of you. Some people just don’t check if there’s anything coming and it looks like self driving cars of the future will continue to protect these impromptu pedestrians, as was demonstrated in a new Tesla Full Self-Driving Beta video.

As you can see in the video, posted courtesy of Whole Mars Catalog, the Tesla Model 3 that had FSD enabled at the time has around seven seconds to react. It doesn’t do anything too dramatic, just veers slightly into the empty lane to the left, then returns to its lane completely undramatically, although we would have liked to see how the vehicle reacted had there been a vehicle occupying the other lane – would it have slammed on the brakes to make sure danger was avoided?

Well, we don’t know, but this very relaxed avoidance maneuver is consistent with the more reassuring reactions that many FSD Beta testers have noticed with the most recent versions of the self-driving suite. In the most recent iterations of FSD, the vehicle seems to be a lot less jerky during many types of maneuvers (especially the longer left turns) that really seemed to challenge it in older versions.

The most recent version of FSD is definitely an improvement, especially in terms of smoothness and the reassurance it conveys to occupants (there seems to be much less wheel sawing than before), but it’s also a bit more assertive and incisive. In other words, the vehicle will now go if it sees a smaller gap in traffic than before, although you can choose from a few settings (Chill, Average, Assertive) and you can dial it back if you want to make sure the vehicle takes its time before performing a maneuver.