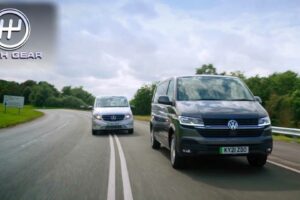 Vans, electric or otherwise, aren’t really known for their dynamic abilities (although they are better than you may think if you’ve never driven one), since none are designed with high speed cornering in mind. They are big, tall and quite heavy, which means that if you were to push one around a twisty road and drive it quickly, the laws of physics would protest in every single direction and the likelihood of the vehicle ending up on its side would increase dramatically.

Their unsuitability for anything other than load lugging makes them amusing to watch when professional drivers really try to drive them as if they were sports cars. That’s why this EV van dogfight video where the Mercedes-Benz eVito battles it out with an ABT-badged electric Volkswagen Transporter has to be great entertainment, right?

Both vehicles are very evenly matched in terms of performance, although the VW is quicker to sprint to 100 km/h (62 mph), needing just 17 seconds for it; the Mercedes needs over 19 seconds to complete the sprint – imagine what the acceleration is like when either of these two vans is fully-loaded…

But just like any good momentum car, once you wind up the Transporter and actually pick up some speed, it can actually be maintained. It apparently has surprisingly good front end grip and as you can see in the footage, it actually doesn’t lean too much. By contrast, the Mercedes is slower to accelerate and less eager to turn, making the VW the better vehicle dynamically of the two.

The two reviewers do point out that part of the reason why both vehicles are so uninspiring is that they are just conversions of existing internal combustion-engined vans – they are just diesel vans that have had their engines replaced by electric motors that draw from a relatively small battery pack.

Volkswagen recently revealed the ID Buzz Cargo, the manufacturer’s first elctric van designed from the ground up as an EV, and it eliminates the issues related to low range and poor performance. We’re pretty sure Mercedes is working on something similar too, but so far the most advanced electric van it has shown is the Sprinter-based Sustaineer Concept.