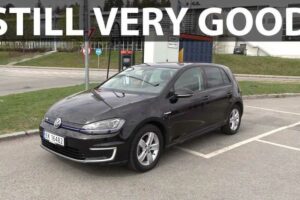 The Volkswagen e-Golf is a retired electric car model, which was popular back in the day, until the German manufacturer switched entirely to the MEB-based Volkswagen ID.3.

There were two main versions of the e-Golf (both based on the conventional Golfs):

The fully charged car was been range tested at a constant speed of about 90 km/h (56 mph). According to the video, the fully charged e-Golf covered some 120 km (75 miles) and still had some more range left – an estimated 6 km (4 miles) at roughly 5% state-of-charge (SOC).

It means that its total range in the given conditions should be about 126 km (78 miles). However, it’s important to note that at a low SOC, the car enforces an Eco mode (it happened at roughly 20% SOC).

The car’s display indicates an energy consumption of 148 Wh/km (238 Wh/mile), which means that the usable battery capacity can be estimated at about 18.7 kWh.

Bjørn Nyland assumes that the usable capacity of the new car was about 20 kWh out of 24 kWh, and the battery capacity degradation is around 6.5%.

It does not sound bad considering that the car is six years old, and the battery does not have a liquid thermal management system. A following fast charging test revealed also that the car was able to charge at a peak of 40-45 kW, which sounds typical for this model.

However, to better understand the numbers, let’s crunch some numbers.

Other than that, Bjørn Nyland noted that the car looks solid and is in overall good condition.