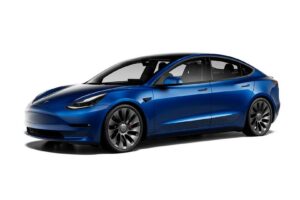 We know EVs and renewable energy are cleaner, so why wait?

We know what we need to do to cut carbon emissions and clean up the air we breathe—replace fossil-fuel-burning vehicles with EVs, and fossil fuel power plants with renewable energy sources.

Stating the problem and the solution may be simple, but actually achieving it will be anything but. No one doubts that the transition to a decarbonized economy will require an unprecedented effort, and we hear a lot of voices arguing that current technologies aren’t up to the task—some believe that the right approach is to focus on researching future technologies, while incrementally reducing emissions from the existing fossil fuel-based system.

Of course, many of these arguments come from advocates for fossil fuel industries (we can’t solve the problem overnight, so it’s better that we do nothing), or for spurious “zero-emission” technologies such as nuclear and hydrogen (let’s replace polluting fuels with other, slightly less-polluting, fuels). Others come from mad scientists selling risky, unproven schemes such as carbon sequestration or direct carbon (it’s too late to lower emissions, but give us a few billion bucks, and we’ll try to clean up some of the mess).

Sadly, however, a lot of these “research, not action” arguments come from people who are “on our side,” so to speak—people who understand the need to address climate change, but who aren’t directly involved in implementing EV and renewable energy solutions, and thus may not have a detailed grasp of the current state of technology.

US Climate Envoy John Kerry recently said, “I am told by scientists that 50 percent of the reductions we have to make to get to net zero are going to come from technologies that we don’t yet have.” It’s certainly refreshing to hear that high-ranking government officials are listening to scientists, but they might do well to also make a point of listening to engineers and entrepreneurs in the relevant fields.

Bill Gates has long been an advocate of researching climate-change solutions, but he seems to have little interest in deploying technologies that already exist. He recently opined that renewable energy and batteries won’t be adequate to decarbonize the global economy, so we need “miracle technologies.” Gates has argued for, and invested in, nascent concepts such as carbon capture and storage, direct air capture, small modular nuclear reactors, and biofuels.

A 2021 International Energy Agency report seems to offer support to the “let’s wait a while” crowd. It predicts that “in 2050, almost half the reductions [will] come from technologies that are currently at the demonstration or prototype phase.” However, the same report acknowledges the feasibility of short-term action: “All the technologies needed to achieve the necessary deep cuts in global emissions by 2030 already exist.”

Of course, Tesla has always focused on action in the here and now, in keeping with the famous Silicon Valley ethos of continuous improvement. Back in 2003, the Tesla team didn’t have an optimal auto battery to work with—they brought the Roadster to the market using widely available laptop batteries (while at the same time developing new tech for the next model).

Tesla has been criticized for prioritizing innovation over quality control, and more than one former Tesla exec has told me that there’s a grain of truth in this—the Tesla way is to bring new tech to the production line as quickly as possible, even if that means making a costly mistake from time to time.

A Tesla that’s on the road is reducing emissions with every mile—a Tesla that exists only in a CAD program isn’t. Furthermore, as I recounted in my history of Tesla, Martin Eberhard and Marc Tarpenning carefully considered the pros and cons of various types of alternative fuels, including hydrogen and biofuels, before deciding to build their company on battery-electric technology.

In a recent article for The Hill, Mark Z. Jacobson, a professor of civil and environmental engineering at Stanford University, examines the claim that we’ll need new technologies such as carbon capture, bioenergy and new forms of nuclear energy to get to net zero.

Of course, renewable energy needs to work in tandem with energy storage. As Jacobson explains, existing storage technologies include batteries, pumped hydropower, hydroelectric dams, flywheels and compressed air storage, and several of these are already in commercial operation. “Already in many places, solar plus batteries is cheaper than coal or nuclear and is replacing both,” Jacobson writes. “In fact, battery costs have declined 90 percent in the past 10 years. No miracle is needed in this area, just more rapid deployment. Thus, we have no need for modern bioelectricity, nuclear, or carbon capture.”

Transportation is the other half of the equation, and here also implementation has gone far beyond the demonstration and prototype phases. “Electric vehicles are commercial and replacing fossil-fuel vehicles of all types and weights,” Jacobson writes. Exceptions include long-distance aircraft, ships and heavy over-the-road trucks. “Such long-distance, heavy vehicles are part of the last 5 percent of energy technologies that may take until 2035 to 2040 to commercialize. However, such vehicles can and likely will run on hydrogen fuel cells. To produce hydrogen, we will use existing and improved electrolyzers powered by renewable electricity. Thus, no biofuel, such as ethanol, biodiesel, or bio-jet fuel, is needed.”

“We have 95 percent of the technologies we need today and the know-how to get the rest to address both energy and non-energy emissions,” Jacobson concludes. “No miracle technology is needed. By implementing only clean, renewable WWS energy and storage and implementing non-energy strategies, we will address not only climate, but also the 7 million annual air pollution deaths worldwide, and energy insecurity. None of the ‘miracle technologies’ addresses all three.”

Of course, no one is saying that basic research, or the investigation of far-future technologies, should cease. However, at this point in history, it would probably be wise to direct more of the world’s limited R&D funding to D, rather than to R. Researchers around the world are working on higher-capacity and faster-charging batteries, more efficient solar cells, better storage options and smarter electrical grids, and their efforts promise to deliver results within years, not decades.

We can’t afford to divert scarce resources to investigating technologies that may or may not pay off in 2050. Most analysts agree that the current pace of electrification is much too slow to stave off catastrophic climate change. To quote from the IEA report cited above: “Climate pledges by governments to date—even if fully achieved—would fall well short of what is required to bring global energy-related carbon dioxide emissions to net zero by 2050 and give the world an even chance of limiting the global temperature rise to 1.5° C.”