What are synthetic fuels? efuels explained 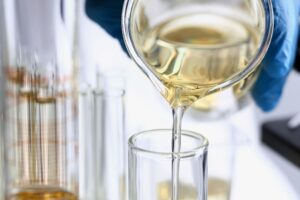 Combustion engines could be viable in a fossil-fuel-free future thanks to new synthetic fuel tech. We explain how…

The world is preparing to shift to a new version of the future that releases us from a reliance on fossil fuels for transportation. Most passenger cars will switch to using batteries and electric motors, but new technology means that there could be a future for the combustion engine, too: synthetic fuels, sometimes called efuels.

It’s possible to produce fuel for existing combustion engines – a replacement for petrol and diesel – using carbon-neutral processes, so it’s thought many combustion-engined cars, trucks and vans will be able to survive into the future without causing as much harm to the planet as with fossil fuels.

Porsche is a big name in the world of synthetic fuel – it has teamed up with Siemens, energy firms Enel and AME, and petroleum company ENAP to build a factory that produces efuels.

The plant is targeting 55 million litres a year by 2024, and 550 million litres by 2026 – though since the UK alone uses 46.5 billion litres of petrol and diesel every year, these numbers are tiny and will mainly be used for testing and prototypes. Porsche says it’s planning to use them in motorsports, at Porsche Experience Centres and in its production cars.

This is just the start of the journey, though (despite the fact that synthetic fuel has been possible for almost as long as we’ve been using oil for our cars), and it’s hoped by enthusiasts that in the future synthetic fuels will be able to keep classic cars on the road without having to rely on drilling for oil.

These fuels could also help to keep parts of the world moving without having to overhaul existing infrastructure. In some countries it simply isn’t possible to use electric cars yet, so these places would benefit from using existing transport running on lower-carbon efuels.

Yet since combustion engines produce emissions locally and efuels require a huge amount of energy to produce, it seems likely that efuels will eventually be used sparingly after a transition to cleaner electric power for the vast majority of applications. It’s not a magic solution that can simply replace petrol and diesel – it needs to be considered as a tool in a growing toolbox of solutions to climate change.

Petrol and diesel are made using oil, but their basic chemical structure is made up of hydrogen and carbon atoms. These hydrocarbons can be created using hydrogen from water and carbon from the air.

It requires a lot of energy to get this process to happen, but this energy can be generated from renewable sources like wind or solar power. Since the process takes carbon out of the atmosphere, it helps to offset the emissions from engines actually burning the fuel (though the local air pollution problem remains).

Since fuel is a way of storing energy, using energy from renewable sources to create it during low-demand periods is a good way to efficiently use our planet’s resources.

It’s not cheap to do this at the moment, since it’s a new process. Just one litre of diesel efuel costs £4 before taxes, according to the Royal Society scientific institute. Economies of scale and further technology developments could reduce the cost – but it will likely never be as cheap as the petrol and diesel we buy today.