Home » Car Reviews » What Is a Rotary Engine and Why Did Nazis Invent Apex Seals?

What Is a Rotary Engine and Why Did Nazis Invent Apex Seals? 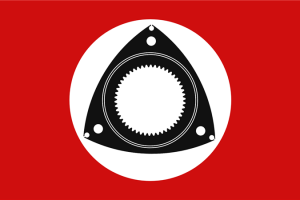 The rotary engine, with its egg-like block and triangular rotor, is an oddball even among all the other oddball engine designs—sorry, three-cylinder, twin-turbo, camless Koenigsegg, ya basic. That uniqueness is something that’s seemingly baked into the engine’s invention, history, and pedigree.

Though every enthusiast likely knows the crib notes of the rotary’s recent history, especially of the ever-popular Mazda sports cars, rotary-powered cars have been produced in one way or another since the early 1950s and by a few different manufacturers. Most failed to come to fruition despite millions of dollars spent in R&D, though a handful made their way out. There were aircraft, tractors, and even a few motorcycles, too.

Its inception, one brought on by a man so thoroughly awful he was kicked out of the Nazis twice, is a wild and insane story. Seriously, buckle up and get ready to rip, as The Drive’s buzzy editors spin the tale of what the rotary is, how it came about, Felix Wankel’s involvement, and its future. 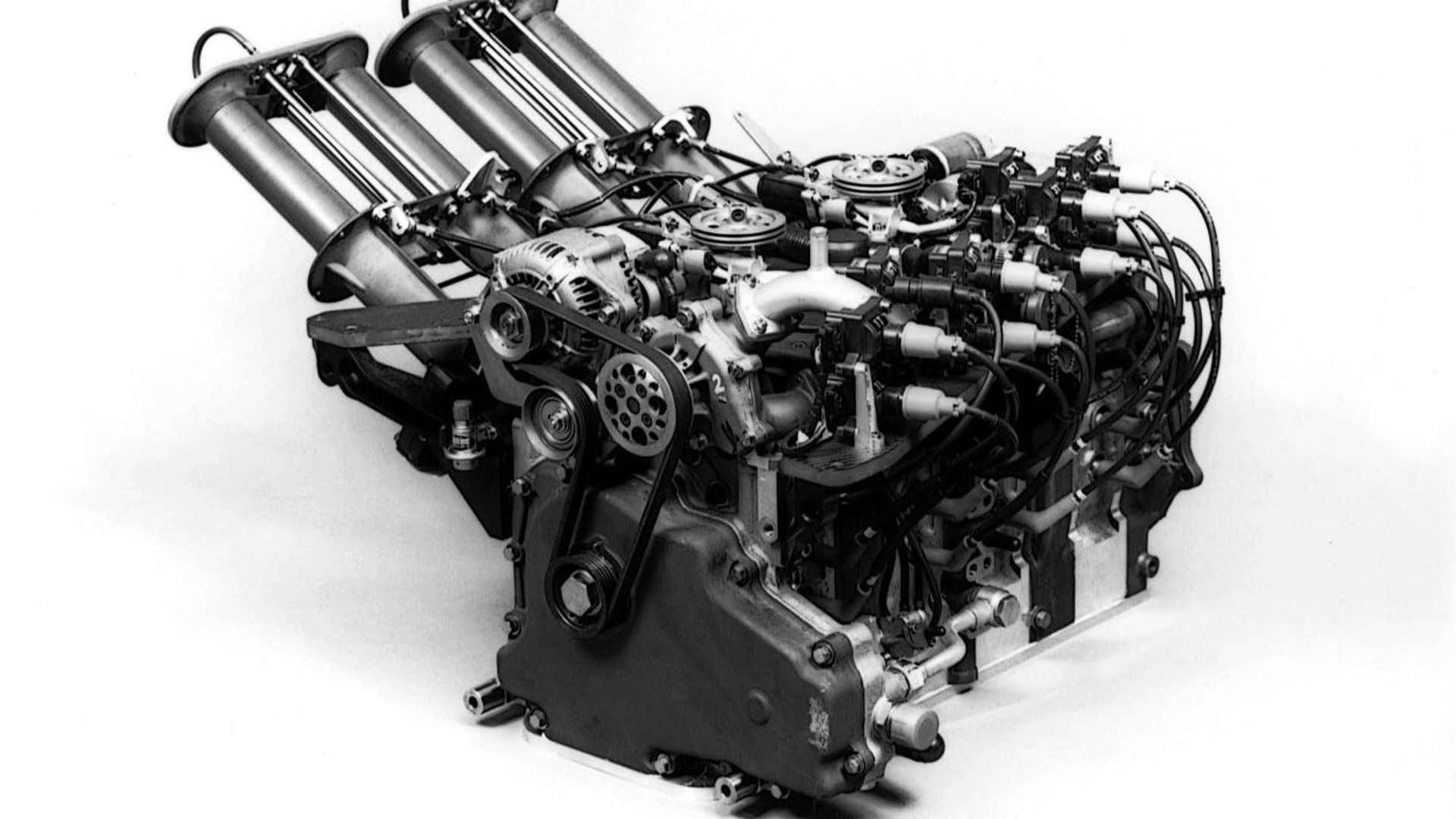 A rotary engine in all its glory.

What Is a Rotary?

It’s a very powerful Dorito. A very powerful and magical Dorito placed delicately into your engine bay and then blessed by a Haitian voodoo priestess. From there, it’s a maniacal hellion that wants to eat your children and all the gasoline in a tri-state area. That’s literally the only explanation for how it works or why it exists. All right, we’re joking, but not by much.

A rotary is a type of internal combustion engine that, instead of using pistons to produce combustion, uses a rotating triangular-shaped rotor that produces three combustion pulses per revolution inside an oval-shaped block. Because of the rotation of the rotor, and the block’s design, the output shaft in a rotary engine spins three times faster than a traditional piston-driven engine. This is what gives the rotary its signature hellacious crescendo.

Who Invented the Rotary?

An uber Jew-hating, would-be Nazi named Felix Wankel drew up the first patent for a rotary engine in 1929. I say would-be because Wankel was deemed too radical for the Nazis and promptly kicked out not once, but twice.

His first ousting occurred after attempting to turn the Hitler Youth in Baden, Germany into a far more ruthless paramilitary organization and smearing Baden’s ranking officer in the press, which also saw him jailed. Hitler intervened and had him released. The second time took place after Hitler bestowed Wankel with the title of Obersturmbannführer of the SS. And if you wanted more evidence that Wankel wasn’t a great guy, Hermann Göring, the Reich Marshal of the Greater German Reich and very convicted war criminal, even set up the Wankel Test Institute for Wankel to help him develop his engine technology for the Nazis. Two years later, he was pushed out for “reasons unknown.” But because Hitler thought he was brilliant, Wankel was spared the usual Nazi exit interview.

With things not exactly kosher in Germany at the time, and Wankel in a French jail for his Nazi activities and banned from research projects after his release for a short time, it took until the 1950s for the first prototype rotary engine to be built. It was commissioned by NSU, a German car manufacturer that was acquired by Volkswagen and Audi in 1969, and Audi still owns the original patent. 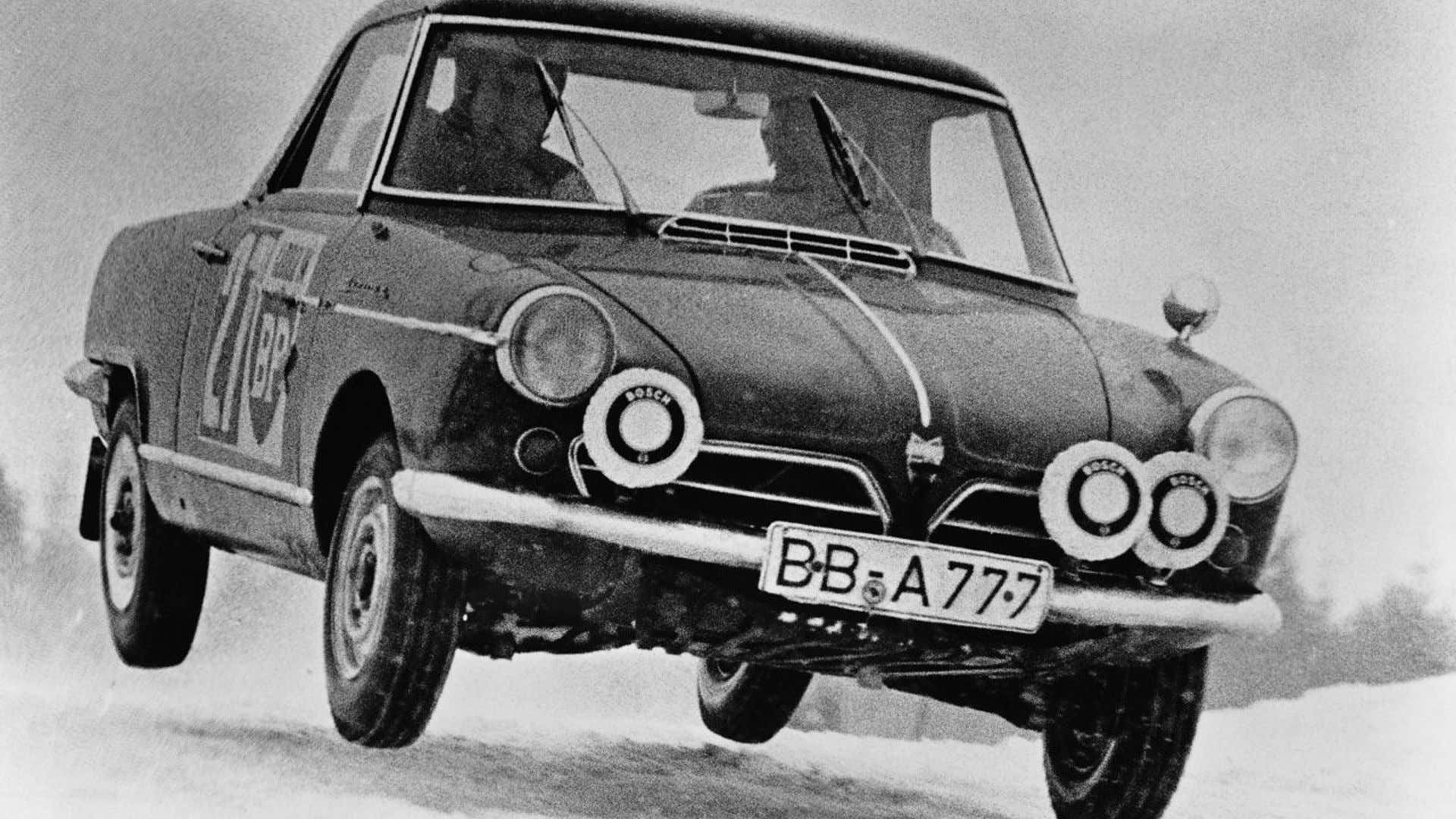 When Did The Rotary Engine Originate?

The first rotary engines were built in 1957 at NSU. Wankel and another engineer named Hanns Dieter Paschke built the first prototypes. But if you thought the insane history of the rotary engine stops with Wankel being a Nazi, you’re in for a surprise.

While working together at NSU, unbeknownst to Wankel, Paschke took Wankel’s designs and greatly improved them. He simplified the entire design, made it more robust, and made it feasible for use in automobiles and other engine-driven machines. When it came out that Paschke did this behind Wankel’s back, Wankel reportedly told Paschke, “You have turned my racehorse into a plow mare.” (Ed. Note: Add a faux German accent in your head for full emphasis.)

Worse for Wankel, Paschke’s design had the last laugh and became the basis for every modern rotary built since. So while Wankel maybe the father of ze rotary, it was Paschke who made it work and whose design trickled down into the Le Mans-winning 787b. Suck it, Nazi! 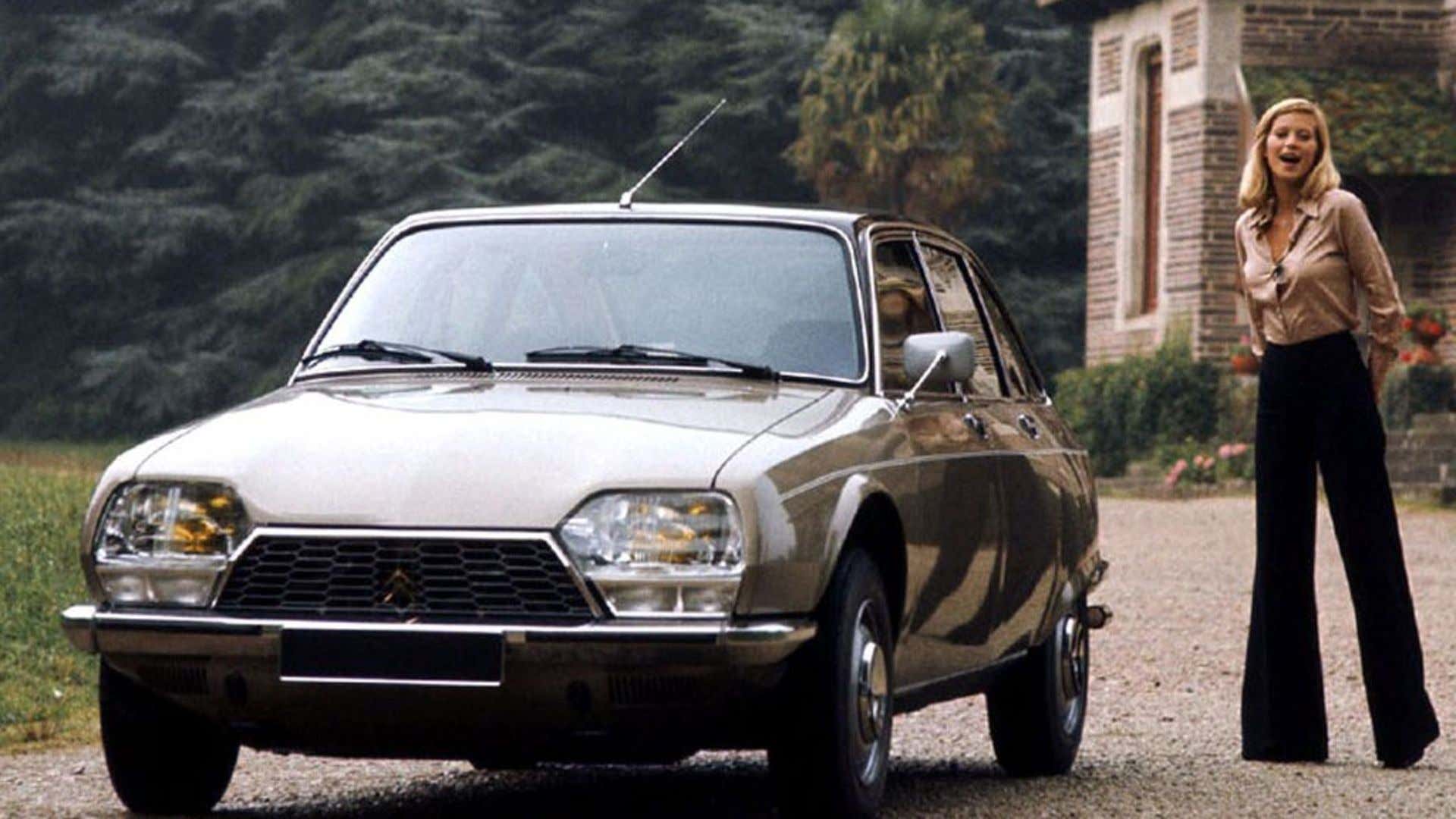 How Did the Rotary Change Through Its History?

In 1960 NSU and Curtiss-Wright partnered to make the rotary more robust, as well as put it into production. NSU agreed to make low-powered rotaries, while Curtiss-Wright made high-powered versions, including aircraft engines.

Through this partnership, auto, tractor, and aircraft manufacturers bought into the partnership of NSU and Curtiss-Wright with licensing agreements for the rotary design. Companies such as Alfa Romeo, Ford, Citroen, John Deere, Rolls-Royce, Porsche, GM, Suzuki, Toyota, Nissan, American Motors, and Mazda all ponied up for the design, which was heralded as the next big thing.

Even a few motorcycle manufacturers got in on the rotary game, but after years of research, development, Citroen’s weirdly awesome Birotor hatchback, and what is likely countless millions of dollars, only Mazda continued its development and production into the modern age. 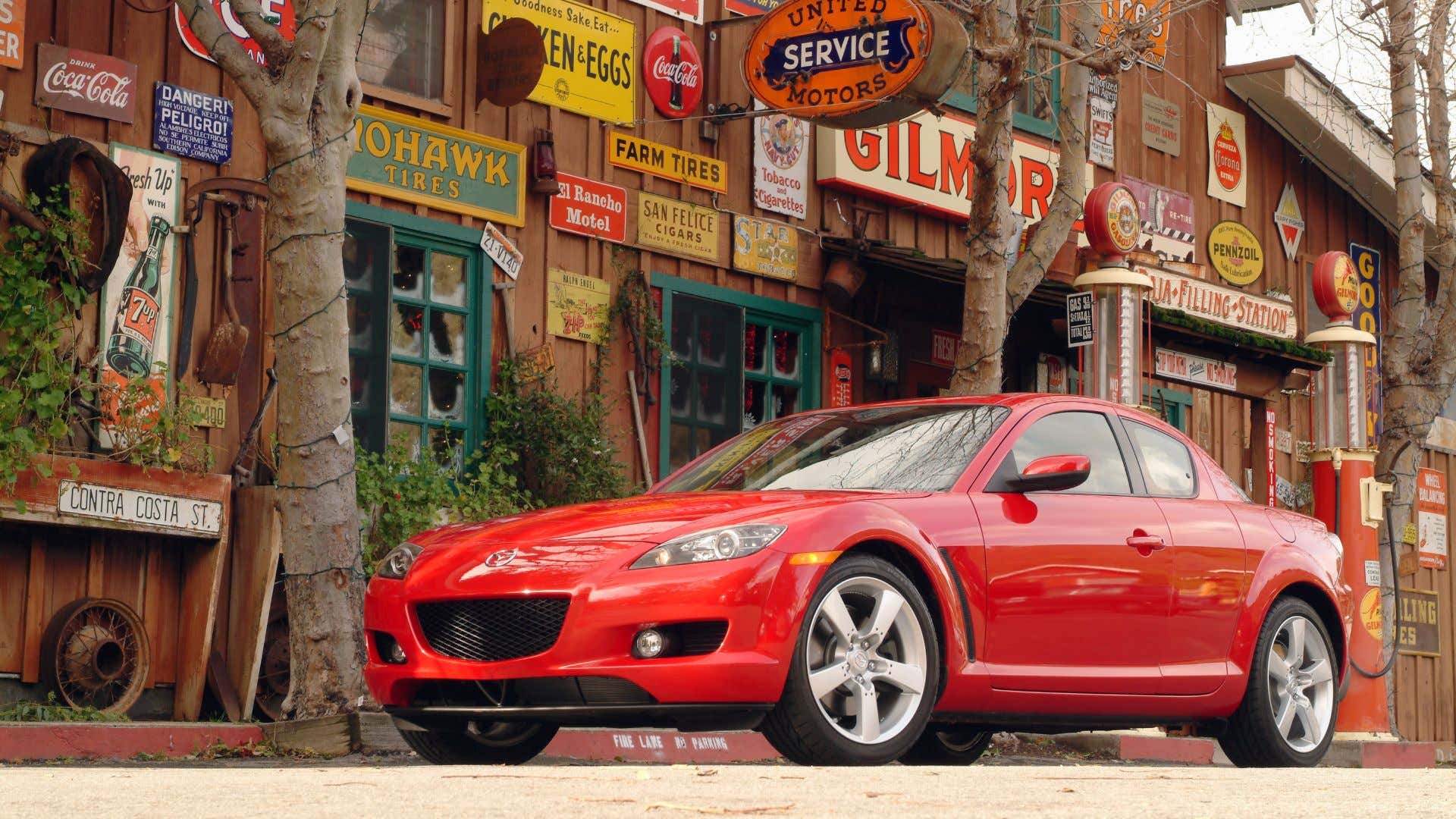 Our wallets ache whenever we see an RX-8.

Mazda’s history with the rotary engine goes back to the original licensing agreement with NSU and Curtiss-Wright in 1961. And it began with a sort of quasi-competition of who could bring the first rotary-powered car to market. Technically, Mazda built the first rotary-powered car in 1961, but it was only a prototype. NSU, however, dropped the NSU Spider in 1964 and won the race. Mazda, though, was determined to fix the rotary’s biggest issue: the apex seals would scratch the inner rotary casing and engine demise.

Led by Kenichi Yamamoto, one of Mazda’s talented engineers, the company finally figured out how to solve the “Devil’s Claw Marks” issue with graphite-aluminum seals. Mazda later showed off two and four-rotor concepts at the 1964 Tokyo Motor Show, but didn’t release its first rotary until the 1967 Cosmo 110S. It was later slotted into the Parkway Rotary 26 bus and Mazda’s B-Series pickup truck. However, with tightening emissions regulations throughout the world, Mazda was forced to revise the rotary’s design again, though it still had a big flaw: It ate gas like I eat Skittles at the movies.

What to do with an engine with such a voracious appetite for fuel then? Clearly, there was only one path as the rotary fell out of favor with more pedestrian cars, and Mazda began solely slotting the engine into its sports cars, such as the RX series and its racers. From that diversion, we got the RX-3, the multi-generation RX-7, and the somewhat unloved RX-8. As well as all the precious metal below… 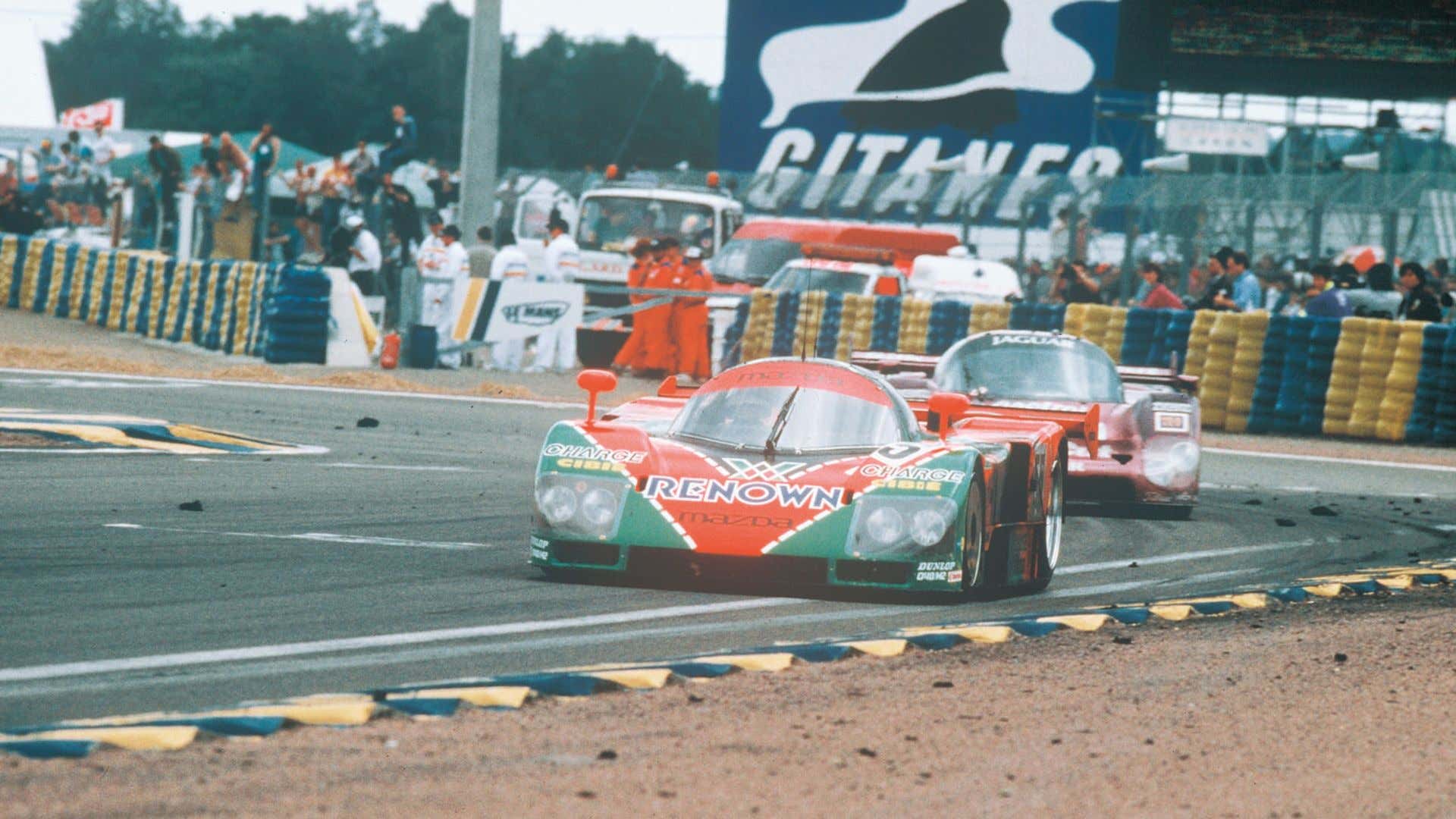 The coolest Le Mans racecar ever.

Before I start on its legendary racing history, I just want to play a video for you as a primer. Speakers on loud.

Have you stopped drooling like one of Pavlov’s dogs? I sure haven’t. But watching that video of Mazda’s brilliantly wild 787 running Le Mans conveys just a small portion of the rotary’s racing pedigree.

Throughout the years, Mazda dropped two-, three-, and four-rotor rotary engines into a number of different applications, including top-tier IMSA sports car racing, prototypes like the 767 and 787 cars, open-wheel cars, and a secret Group B rally prototype with an 11,000-RPM two-rotor RX-7. Mazda’s first rotary win came in 1972 when a two-rotor RX-2 sports car won an IMSA RS race at Lime Rock Park.

Mazda found success in its RX series, winning races with the RX-2, RX-3, and RX-7. And with the introduction of the RX-7, it went on a winning streak snatching its class podium for 10 years at the 24 Hours of Daytona. It also won the IMSA Grand Touring Championship Under Two Liters every year between 1980-1987.

The rotary’s biggest claim to fame in racing, however, came in 1991 when a four-rotor 787B prototype racer, the one in the video above, won the 24 Hours of Le Mans outright. It not only became the first and only rotary engine to win the famed race, Mazda became the first-ever Japanese constructor to win, too. Neat!

What Models Currently Feature a Rotary?

None. Mazda kept it alive for as long as it could, but it was dropped from the lineup in 2012 when the RX-8 was retired. Mazda says it’s bringing back a rotary engine, though it will be used as a range extender in one of the company’s forthcoming hybrid cars. Not exactly the triumphant return of the legendary engine.

Learn How To Drive Your Rotary With Skip Barber Racing School

Learning your car’s behavior, quirks and personality can be done on your own, but you’re not exactly doing so in a vacuum. A missed braking point or target fixating on that tree over there could mean a bent bumper or some serious medical bills. Why take the chance when you can learn safely how to drive your rotary from the professionals at Skip Barber Race Car Driving School?

The Drive has partnered with Skip Barber, the legendary racing school, to ensure that when you first prime your rotary ignition, you won’t fly off into a ditch.

You’ve got questions, The Drive has answers!

Q: Why Does Jesus Hate Rotaries?

Q: Ok, But Can a Rotary Engine Run on Diesel?

A: A rotary engine can be run on a few different fuels, including diesel, ethanol, methanol, alcohol, and regular-old gasoline. It won’t run on your tears collected after a trip to the mechanic’s.

Q: So How Many RPMs Can a Rotary Engine Turn?

Q: Then How Many Apex Seals Does a Rotary Engine Have?

A: Three per rotor.

Q: I’m Afraid to Ask, But How Much Does It Cost to Fix Apex Seals?

A: Start by giving the mechanic $2,000 and then be prepared to fork over many thousands after that until your destitute and living in a van down by the river.

Let’s Talk, Comment Below To Talk With The Drive’s Editors!

We’re here to be expert guides in everything How-To related. Use us, compliment us, yell at us. Comment below and let’s talk! You can also shout at us on Twitter or Instagram, here are our profiles.

END_OF_DOCUMENT_TOKEN_TO_BE_REPLACED

END_OF_DOCUMENT_TOKEN_TO_BE_REPLACED
We and our partners use cookies on this site to improve our service, perform analytics, personalize advertising, measure advertising performance, and remember website preferences.Ok