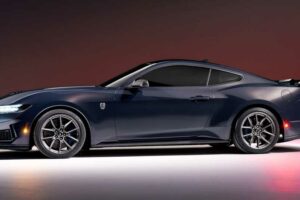 Despite a fairly late reveal for the East Coast, the new seventh-generation 2024 Ford Mustang has been revealed and heralded as nothing short of the saving grace of the muscle car world, with its revised 5.0-liter V-8 offering up to around 500 horsepower linked to a (still-available!) manual transmission. But that’s only the tip of the iceberg with this car, considering there’s now the all-new Dark Horse edition, plenty of motorsports news, and a seemingly missing hybrid powertrain option that everyone thought this ‘stang would have but that we can explain.

Naturally, the staff of MotorTrend have their own coverage of the reveal event and seventh-gen muscle car, with Alisa Priddle taking point on covering the details:

MotorTrend‘s own head of editorial Ed Loh was pretty jazzed about the reveal:

Our own Alexander Stoklosa apparently didn’t learn animals in preschool or something, had this to say about the Dark Horse’s logo:

Our own Christian Seabaugh made some points about the GT offering 480 horsepower in the day and age of Hellcats and, well, Hellcats, but still:

Many folks are understandably surprised to find out there’s no apparent plans to electrify the Mustang (outside of, you know, the Mustang Mach-E EV SUV), despite previous patented drivetrain layout featuring an engine paired with electric motors that seemed to strongly hint that Ford was exploring a hybrid option for the new car at some point. Here’s MotorTrend‘s Andrew Beckford with more on why a hybrid or fully electric Mustang coupe isn’t happening, at least for now:

Leading up to the reveal, Ford really set the stage. First, there was a week-long Mustang owner parade across the country that led up to Hart Plaza in Detroit, Michigan. Then the owners and media were gathered just as the sun was setting in a makeshift outdoor stage and theater. Here’s a clip of the so-called “Stampede” of six generations of Mustang leading up to the final reveal event in Detroit:

Ford Performance driver Austin Cindric was there at the final rally of Mustangs in the plaza, revving away:

Racer, pit crew member, and frequent writer Bozi Tatarevic was right to highlight how exciting Ford’s all-in approach to motorsports will be with all the new performance and track variants of the new Mustang:

Speaking of, it looks like Ford also has officially now revealed the upcoming NASCAR Cup Series Mustang model in some of the released materials, among other promised racing variants:

Some big news from the night was Bill Ford’s announcement that the Mustang will go and race at Le Mans, which is pretty exciting:

Trevor Charles Gowan, a Ford exec, praised the new Mustang design with some renderings and sketches:

Also, be sure to check out Hot Rod‘s coverage of the cool 2024 Ford Mustang Cobra Jet drag racer:

And you can find more MotorTrend coverage of the 2024 Ford Mustang here.