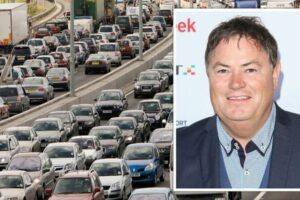 Speaking exclusively to Express.co.uk, he said: “We know there’s going to be change in the future towards electrification, or hybrid cars or alternative fuelled cars, but petrol will still always be available.

“Classic cars will become, more or less, a luxury item. But they are a massive part of our heritage and they need to be protected.

“What we are going to see when we move towards 2030, I’ve got a funny feeling that the deadline from the Government is going to slide.

“We’re nowhere ready for the electrification of cars on our roads.

“We simply haven’t got enough resources or charging points to do that yet.

“It would be a civil engineering project on the scale of HS2 times 10 to get the amount of infrastructure we need in place that we need to cope.”

When the move was originally announced, the Government pledged nearly £500million to support 169,000 jobs and help industries transition towards zero emissions.

This is set to be done in two steps, with the first rule seeing the phase-out date for the sale of new petrol and diesel cars and vans brought forward to 2030.

Step two will see all new cars and vans be fully zero emission at the tailpipe from 2035.

Between 2030 and 2035, new cars and vans can be sold if they have the capability to drive a significant distance with zero emissions, and this will be defined through consultation.

Many are concerned this could lead to a crackdown on classic cars, some of which produce levels of emissions which would go against the Government’s net zero aims.

Recent introductions of Clean Air Zones and the expansion of the London ULEZ also had many classic car enthusiasts worried that they may effectively be banned from major cities.

London’s ULEZ as well as CAZ areas in Birmingham, Bath and Portsmouth do not charge historic vehicles which are older than 40 years old.

Mr Brewer continued, saying: “There’s a lot of MPs and a lot of people in our Government that are classic car enthusiasts and they don’t want to see them taken off the streets.

“Plus the classic car community as a whole contributes massively to the economy in Britain.

“There’s painters, restorers, part suppliers, all these people that contribute.

“It’s really important that the Government protects classic cars for the future. And they do, they have got measures that do such a thing.

“They’ve got tax exemption and no MOTs on cars over 40 years of age.

“They are little protective measures from the Government to say ‘we know you’re out there’.”