Home » Car Reviews » Who Will Win The Electric Car Race? And Not The One On A Track

Who Will Win The Electric Car Race? And Not The One On A Track 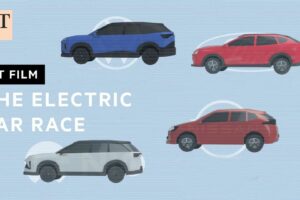 Posted on EVANNEX on December 26, 2021 by Charles Morris

The media assures us that there’s an “EV race” underway, but the race to develop electric vehicles is a lot more complicated than a simple drag race (we know who’s always going to win those). You could say there are at least three races going on: automakers are competing against each other; Big Auto is scrambling to defend its market against the scrappy EV startups; and the  main global auto-producing regions (North America, Europe, China, Japan and Korea) are vying to lead the transition and grab a share of the new jobs and economic gains at stake.

In a new video from the Financial Times, four reporters deliver some observations about the current state of the EV industry, while zipping around the world’s EV hotspots in four representative vehicles.

Christian Shepherd navigates the streets of Beijing behind the wheel of a NIO ES6. “In China, it’s all about the EV startups,” he says. “For decades, China has wanted to have a globally-recognized car brand. They’ve never really been able to achieve that. This revolution in the auto industry…is the perfect opportunity for them.” The first wave of Chinese EV-makers included established companies such as BYD, which sold large numbers of taxis to governments. The second wave is “really trying to follow more of the Tesla model. Now we talk about the Fab Four: NIO, Xpeng, WM and Li Auto.”

Claire Bushey, tooling around Chicago in a Ford Mustang Mach-E, says, “The electric car race in the US is between Tesla and everyone else. Yes, Tesla has had some quality-control problems—it’s almost like they’re a new car company!” She sees a shakeup ahead for the industry. “The companies that get it right will be around for another generation. Those that don’t will disappear.”

Peter Campbell glides through the lovely English countryside in a Volkswagen ID.4 as he tells us, “Tesla came in 2012 and released the Model S, which showed what an electric car could be.” However, he’s skeptical about the oft-repeated trope that Tesla and other EV startups will drive legacy automakers into Kodak-style obscurity. “This is an industry that makes 19 million cars a year, and Tesla last year produced half a million. The idea that Volkswagen, GM or Toyota are going to be bankrupt in the next few years because of Tesla is just nonsense…The advantages of being an established carmaker are colossal.”

Leo Lewis, touring Japan in a Nissan LEAF, also rejects the idea that Big Auto will go the way of Big Photo. “A lot of these established players are going to be very serious competitors. I think they’re going to put up a hell of a fight.” He takes a contrarian view, speculating that Toyota or Mercedes might reverse course and emerge as “the one to beat.” (We’d sooner put our money on the Volkswagen Group or GM.)