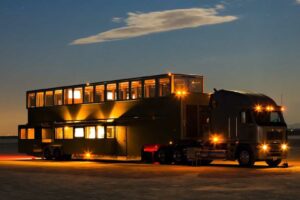 We’ve seen all kinds of luxury RVs over the years, but we’ve never seen anything like this. That’s saying something, because our love of RVs has uncovered everything from massive expedition vehicles to crazy-custom converted buses and million-dollar motorhomes with room to carry a car inside.

The one-of-a-kind creation featured in this above video is called the Anderson Mobile Estate, partly because it’s built by a man named Ron Anderson but also because it’s freaking huge. This is basically a full-size semi trailer with multiple slide-outs on the side and a roof that lifts to create a functional second floor. With everything expanded you get 1,200 square feet of living space inside, which is similar to a modest house. According to the video description, it’s the largest RV in the world.

With a value of $2.5 million, it’s also listed as the most expensive RV in the world. Creating a double-decker travel trailer certainly doesn’t come cheap, but the interior is awash with luxury. It was custom-built for Hollywood actor and rapper Will Smith, and no expense was spared in its design or the materials used. $125,000 was spent on granite surfaces. The kitchen alone is $200,000. It’s packed with electronics including no less than 14 televisions. The master bedroom features a bed that also converts to a couch, and a luxurious desk converts to a private makeup station that can be accessed by a separate door at the back.

According to the video, Ron is once again the owner of this massive rig, and we mean rig literally because it requires a semi-truck to pull it. As such, it doesn’t cater to movie stars at the moment, but if you’re keen to sample the Hollywood lifestyle, it’s available to rent for the stately sum of $9,000 per night.