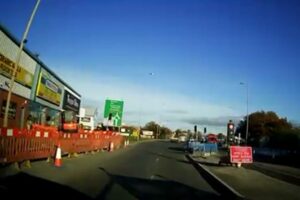 Gareth Wilson’s customer was told she had run a red light during the test and received an automatic failure. However, dashcam footage shows the student was unable to see the lights in time because a vehicle had been blocking her view on the central reservation near roadworks.

Gareth, 40, is “gutted” for the woman, whose view was obscured in Stoneferry, Hull, during the exam.

Speaking to Hull Live, Gareth said: “The vans were completely blocking the view of the lights, I couldn’t believe how they were parked to be honest.

“When she told me she’d gone through a red light I was a bit surprised but I thought it was fair for her to fail, when I saw the footage and how the vans were parked I was upset for her though.

“Even an experienced driver would have struggled to slow down in time for that red light I think but for a learner with all the nerves and focusing on the test it was impossible.”

Although the examiner was apologetic, Gareth understands he had no choice but the fail the woman.

But she now must wait three months before she can have another attempt at passing her test.

Gareth continued: “The examiner was even apologetic, I don’t blame them there are rules and if you go through a red that is an automatic fail.

“I was just absolutely gutted for her, it has knocked her confidence and now she’ll have to wait for another test and pay for it too.”

The woman will have to fork out £250 for another test and the cost of refresher lessons until the test day itself.

There is a well-documented backlog of learners waiting for tests after COVID-19 delays.

And Gareth says this is reflected in the anxiety in his students.

The driving instructor has contacted Hull City Council with the clip but hasn’t got a response.

Gareth said: “My student now has to wait until next year before she can have another go at taking the test.

“I feel sorry for learner drivers around the city at the moment, it is difficult for everyone but especially for them with all the roadworks too.

“The road markings there have been changed back and forth a few times, one minute you can go straight on and right in the middle lanes and then they change it back again.

“It isn’t easy for anyone on the roads at the moment but spare a thought for all the learners who are having to deal with this too, it’s pretty horrible.”

Hull City Council were approached but said they would not comment on a decision made by an independent examiner.