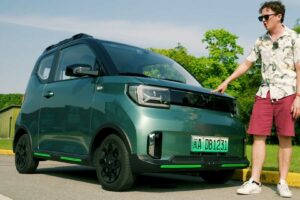 The Chinese EV market keeps growing at a very high pace. In April alone, about 213,000 fully-electric vehicles and some 68,000 plug-in hybrids were delivered in the country, where the plug-in segment now accounts for about 29 percent of the entire market. The best-selling EV in China continues to be the Wuling Mini EV, of which 27,181 units were handed to customers in April alone. The year-to-date results show 127,542 sales for the small electric vehicle, giving it a comfortable lead over the second best-selling EV, the Tesla Model Y with 75,250 deliveries.

We talked about the Wuling Mini EV in March this year when the so-called GameBoy Edition was launched in China. It has four different versions, Hurricane Phantom, Jungle Traveler, Star Rover, and Party Sweetheart, each one of them featuring a slightly different exterior finish and a different wheelset. We can now see how this new affordable zero-emissions city car looks on the road thanks to a new video review by our friends from Wheelsboy车轮哥.

The current Mini EV has changed a lot since the first version of the vehicle debuted, especially in this special edition version. There are new lights at the back and upfront, plus a sporty package with additions to the bumpers and side skirts. The proportions and the overall stance of the machine remain unchanged, though – a tall and narrow body with boxy edges and tiny 12-inch wheels. One funny detail worth noting is that this GameBoy edition doesn’t come as a result of a cooperation with Nintendo and has nothing to do with its Game Boy series.

The interior has been upgraded significantly but is still the same relatively cheap-looking and very tight space. The host of the video points out there’s now Bluetooth functionality added and a redesigned center console with new materials. The seats, despite the new fancier upholstery, are among “the least comfortable” on the market.

The most important upgrades over the earlier versions are under the skin, though. This new Mini EV has 15 percent more power, now with a peak at 41 horsepower (30 kilowatts) and around 75 pound-feet (110 Newton-meters) of torque. Another huge improvement comes from the larger 26,5-kWh battery pack, which is good for as much as 186 miles (300 kilometers) at a single charge measured by the NEDC standard. The ride quality and the handling, however, are at the same mediocre level as the pre-facelift version.