Home » Car Reviews » Xpeng P5 On Navigation Guided Pilot 3.5 Is At Home In The City

Xpeng P5 On Navigation Guided Pilot 3.5 Is At Home In The City 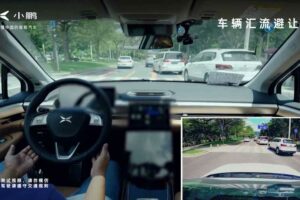 One of the many unique and innovative features offered by the new XPeng P5 electric sedan is its Navigation Guided Pilot (NGP), an advanced semi-autonomous driving system that even works in the city. It’s similar to Tesla’s Full Self-Driving, but unlike the Tesla, the XPeng also relies on LiDAR, while the latest versions of FSD only need cameras to work.

But XPeng is convinced having LiDAR is still the better solution and its NGP really seems to be really good with it. The manufacturer recently released a new video demonstration showing its new P5 driving itself around a city in China using the latest beta version of the system, called X-Pilot 3.5 ADAS.

XPeng has had NGP for a while in its vehicles, but the latest release version, X-Pilot 3.0, doesn’t use LiDar and it can only be enabled on extra-urban routes; it won’t work in the city. And this is where version 3.5 with its additional LiDAR array comes in and, as you can see in the video, it performs quite well in town.

The vehicle seems perfectly safe and it seems to be able to adapt to whatever is around it, as well as navigate urban infrastructure in China. We definitely want to see more, and maybe even get a chance to experience X-Pilot 3.5, but based on this video (as well as the previous shorter one released not long ago), it looks remarkably promising.

XPeng will offer X-Pilot 3.5 with the new P5, but it won’t come as standard. Not even version 3.0 will be free and you will also have to pay extra to get that in the vehicle. The P5 just went on sale in China, but the manufacturer has plans to sell it outside its home market in places like Europe.