Yes, There's A Guinness World Record For Changing Tire On A Moving Car 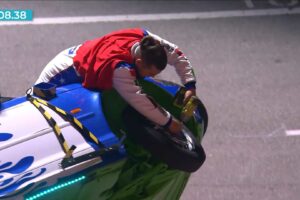 Friends, it’s time for some transparency. Oftentimes with bizarre stuff like this, we strap on our creative caps and attempt to craft a witty introduction to match the craziness of the subject. This time around, however, we’re whipped into submission. What words can match the batshit crazy antics taking place in this video?

For starters, let’s get a show of hands from the people who knew that changing tires on a moving car was even a thing. Nobody? In that case, you probably didn’t know it was a competitive thing, but alas, this duo from Italy set a new Guinness World Record for the fastest tire change on a car … in motion. Mind you, this is a new Guinness World Record. That means there was an old one to beat. It’s not just a one-off thing!

As we all come to terms with that, here are the specifics. According to the video description, we have Manuel Zoldan driving this older BMW with Gianluca Folco sitting in the passenger seat. That is, he starts in the passenger seat but quickly climbs out the window as Zoldan gets the Bimmer up on two wheels. Rule number one when changing a tire on the move – the wheel in question obviously can’t be moving. So while Zoldan slowly circles the floor with the BMW precariously balanced on two wheels, Folco removes the motionless front wheel and swaps it with one mounted on the door.

He’s got the tools, he’s got the talent, and he gets the job done in record time. Specifically, he completes the task and jumps off the car in 1 minute, 17.64 seconds, beating the old record by just over 13 seconds. It’s most decidedly a team effort here, as Zoldan displays incredible car control to keep the BMW balanced at such a slow speed. What else can we say but congratulations?

It’s an impressive act with absolutely no application in the real world, but then again, that can be said for all the cool fun things to do in this crazy world. Is it a weird goal to achieve? Absolutely. But we’ve seen weirder.