You Could Build This Volkswagen GTI BBS Concept 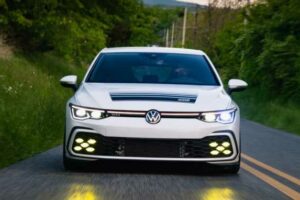 Volkswagen will never let us forget that the Golf GTI started the hot hatch genre and that it’s been around for almost half a century. There have been Edition 35s and 45th anniversary editions marking the model’s age, but the latest heritage-rich special-edition GTI based on the newest MkVIII version isn’t here to celebrate a birthday. The GTI BBS Concept is simply a nice homage to the breed’s beginnings and early style.

As a quick history lesson, the original GTI came out in Europe in 1976. America didn’t get its hands on the GTI until 1984, where VW introduced the hatch as the Rabbit GTI. Even though it was continually produced for Europe since the ’70s, the GTI was an on-again, off-again affair in the states, with one of the most notable delays coming in the early ’90s.

The MkII version of the GTI was the only GTI to be built in the U.S. And that is part of the inspiration for this project—a MkII built by someone else that caught Jamie Orr’s eye. If you aren’t familiar with Orr, think of him as a sort of leading light in the world of VW tuning.

Starting with a three-pedal version of the 2022 Golf GTI, Orr and VW spiced things up with some new wheels from, you guessed it, BBS. The German wheel manufacturer’s rims have been used on GTIs since the MkII came out in 1984, and the classic basket-weave design used here featured prominently on earlier models.

Really, the project could have started and stopped with the excellent BBS rims’ fitment, but Orr and VW continued on. Other changes include a way lower ride height courtesy of some new H&R coilovers, some decals on the front and on the side of the car, yellow fog lamps, and an exhaust by Borla.

It’s a tasteful set of changes that give the GTI a lot more presence on the road and a vaguely retro vibe. Even better, you could easily replicate these changes yourself on a MkVIII GTI for yourself, and that helps keep this concept true to the virtue of affordable performance that made the GTI so special in the first place.