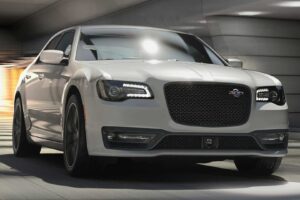 The seminal 2023 Chrysler 300 sedan, instantly recognizable for almost two decades, is ending its run with a celebratory limited run of 2,200 performance models which are already sold out. The sedans bring back the 300C name and have the 6.4-liter Hemi V-8 engine under the hood that belts out 485 hp and 475 lb-ft for a 0-to-60 mph dash in 4.3 seconds.

The car was revealed to the public Sept. 13, on the eve of the North American International Detroit Auto Show. The order books opened at www.reservation.chrysler.com and 12 hours later the car was sold out, says Chrysler brand CEO Chris Feuell. There is now a waiting list.

Interested buyers only had to choose a color, a dealer, and leave an undisclosed deposit to secure one of the cars priced at $56,595.

It was a good test of Chrysler’s new digital reservation process. The brand wants to make it easier to buy and own a new vehicle, Feuell says. The 300 may be going away after the 2023 model year, but Feuell says she would love to resurrect the name on a future product. With plans to take the Chrysler brand fully electric by 2028, with the first all-electric model due in 2025, that future product potentially resurrecting the 300 name will likely be an EV.