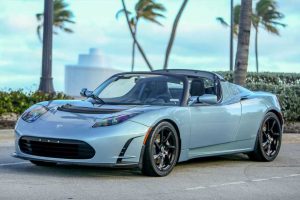 Holding out for the next-gen Tesla Roadster? Keep waiting. While Tesla says the new open-roofed supercar will enter production sometime this year, we reckon the second-gen Roadster is well over a year away. Hey, we warned you of this when we showcased the rather impressive drop-top Model S conversion carried out by Ares Design and mentioned that if it’s a drop-top Tesla you want, then you’re either going to write the check to Ares Design or source a well-kept first-gen Roadster. Hey, speaking of …

As part of RM Sotheby’s recent Arizona sale, a well-optioned 2011 Tesla Roadster Sport R80 3.0 crossed the auction block, claiming a respectable $112,000 final sale price (including fees). Not bad, considering second-hand EVs hold value about as well as a decade-old water-damaged Maserati. This car’s final price, however, proves that even the most desirable Roadster variants still haven’t dug into a collectability niche quite yet.

With an original purchase sticker starting somewhere around RM Sotheby’s final hammer price, this Roadster is well-optioned in “Sport” configuration and is one of a handful of original Roadsters to undergo the $29,000 R80 3.0 battery upgrade that increased range to 340 miles. Despite this car’s rather low 17,492 miles, it couldn’t quite match the $140,000 sale price of a 4,000-mile 2011 Tesla Roadster Sport with R80 upgrade that changed hands at RM Sotheby’s Elkhart sale. Wrong time, wrong crowd? Who knows—the collectible Tesla market is still in its infancy.

We’re not sure if it’s the miles, condition, color, or lack of interested bidding parties that are responsible for that $28,000 price gulf, but those who are interested in picking up a first-gen Tesla Roadster would do well for themselves by checking around with specialists before locking in on one particular car.