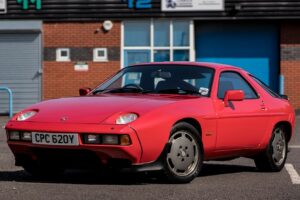 The crowd apparently “went wild” when a 1979 Porsche 928 S sold for a whopping, record obliterating $1.98 million at auction last weekend. If we were at the Barrett-Jackson bash in Houston, though, I think our reaction would be more along the lines of befuddlement.

Yes, the 928 had some Hollywood history. It was one of three used in the filming of Risky Business, and Tom Cruise is said to have been taught to drive a manual in that very car. But still, nearly £1.5 million is an incredible amount of money, particularly when you can get one of these cars for a fraction of the price.

Just take a look at this 928 S. Having had a couple of long stretches in storage, the mileage is exceptionally low considering its near 40-year age with a mere 65,051 showing on the clock. Being the updated S model, it can one-up Tommy’s borrowed ride in terms of displacement, with a 4.7-litre V8 versus ‘his’ 4.5. The rumbly eight-cylinder engine sends its power rewards via a five-speed manual gearbox, rather than an automatic as more often seen on 928s.

The bodywork is undamaged, and the shell looks nicely fresh thanks to a full respray in Guards Red. Inside there’s a two-tone grey and black fabric interior which has aged much better than it might have done if full leather was specced, although there are some creases on the outer vinyl bits.

It had a major service in May 2021 at a place called DC Engineering, receiving fresh fluids and filters plus a new cambelt, spark plugs, battery and temperature sensor. All that lot wouldn’t have come cheap. Whoever wins the auction will need to budget for new boots, though – the most recent MOT had an advisory for cracking tyres, so those Toyo Proxes must have been on there a while.

Along with extensive service records (which contain some gaps due to the car’s time in storage), the original manuals and a copy of Classic Porsche magazine featuring the car are included in the sale. The title of that article? ‘Risky Business,’ both in reference to the film and Porsche‘s original intention for the 928 to replace the 911, which as we now know, didn’t exactly work out.

The 928 S is going under the virtual hammer via Collecting Cars. At the time of writing the bidding is at £6,500 with three days to go before the auction ends on Friday 24 September. That figure will rise significantly, but perhaps not by as much as you’d think. A higher mileage but still reasonably tidy manual S went on the same platform recently for £14,500. Steer clear of ultra-sought after versions like the GTS and examples with Hollywood connections, and the 928 can be – in 2021 terms at least – a classic car bargain.