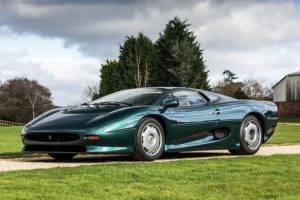 The early 1990s weren’t kind to supercars. The lucky ones, some might say, folded before they got off the drawing boards, but the ones with some serious backing arrived to muted fanfare or few buyers, or had to live to see their aspirations dialed down a few notches.

The Jaguar XJ220 was among the latter, debuting in 1992 after several years in development. Jaguar itself had sustained damage in the process, navigating the early 1990s in a cautious manner, but it never lost sight of its goal to build a supercar of its own.

In about a week an XJ220 will head to auction—car number 97 from the original production run showing just over 14,000 miles on the odometer—an example that has been recently recommissioned for the road at great expense. Historics Auctioneers will offer the 1992 supercar at its Ascot Racecourse auction in the U.K. on April 17.

The back story of the XJ220 is seldom brought up these days, but is worth recalling for its ambition. Sketched out by Professor Jim Randall, who headed Jaguar’s engineering department in the 1980s, the XJ220 was imagined as a slippery, rear-engined V12 beast with ground effects and four-wheel drive. The sketches went from an off-hours pet project to something more formal in a short span of time, with the company taking a liking to the idea. The sketches turned into a concept car, one that was shown at the Birmingham Motor Show in 1988, with a V12 and 530 hp on tap. The economy was still strong enough by that point in time, at least in the U.K., so the £50,000 deposits rolled in. 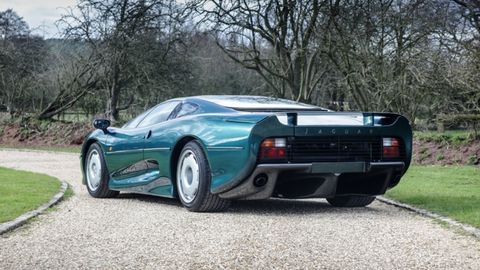 Quite a lot changed between the concept and the production car over the next four years, with the V12 becoming a twin-turbo V6, and its four-wheel drive was downgraded to rear-wheel drive. What didn’t change much were the dramatic lines of the car, as well as the mid-engine layout. By the time the XJ220 debuted, much had changed in the economic landscape, and it saw a lot of canceled orders, but it still arrived at a time when many of its rivals, including Aston Martin, were barely treading water.

The example that Historics Auctioneers will offer later this month was originally ordered by Mr. Jean Blaton of Belgium, arriving on December 12, 1992. The car covered only 22,691 kilometers, or about 14,100 miles, in his ownership, and had been serviced by a number of specialists during that time, including the Jaguar factory at Browns Lane, JaguarSport Ltd. in Banbury, and British Auto Center in Antwerp, Belgium, despite not having covered all that many kilometers.

The auction house hints at some periods of inactivity, but doesn’t explicitly mention whether it had seen some long-term periods of storage. Despite the modest mileage, it appears that it did need some serious recommissioning work that resulted in a breathtaking bill: Jaguar specialist Don Law, known for XJ220 work, has recommissioned this XJ220 to the tune of £61,760.03 in October of 2020, which translates to an even more sobering $84,840. The work included a replacements of all the seals and gaskets on the engine, a braking system overhaul, new timing belts, a six-year service, and “other additional work.”

Exactly when those 14,100 miles were added to the car can perhaps be inferred. The good news, of course, is that it was Don Law’s workshop doing this work, which has plenty of experience with Jaguar’s rarest machines, so if this is what it took to make this XJ220 roadworthy again, then that’s what it required. 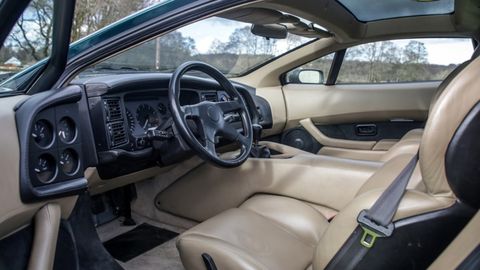 The XJ220 is now almost a 30-year-old car. XJ220 values have firmed up quite a bit in the past five years, but haven’t quite skyrocketed like those of Testarossas. The bottom estimate here would have been considered a little ambitious about 10 years ago, but $400,000 is now the price of entry into this club, with many collectors looking for ’90s supercars (that aren’t the now-unaffordable McLaren F1) to put some money into.

The cast of characters from the 1990s likely to see appreciation in the next decade isn’t very deep, and the XJ220 happens to be one of those that could see some gains over the next few years as collectors seek out underappreciated blue-chip vehicles.

Jaguar XJ220: underappreciated or, with a low estimate of $400,000, overvalued? And what other supercars from the ’90s to you expect will take off? Let us know in the comments below.