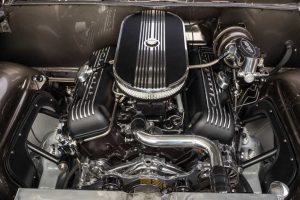 You might think that, after being involved with NASCAR, building and driving a street car wouldn’t seem exciting. But for Tony Gomez, his automotive enthusiasm extends to just about everything—whether it’s circle track racing or city street cruising. The hobby is a family tradition, and he’s been involved for more than 40 years. This 1959 Chevy Impala, packed with the original 348 and modified with NASCAR-inspired details, is one of several Chevys in his current fleet, but its interesting history sets it apart.

The “Race on Sunday, sell on Monday” heritage associated with NASCAR competition in the ’50s and ’60s is part of what set Tony on the hunt for a ’59 Impala in the first place. This one, however, had never made a lap of an oval track.

He found the Impala on the Internet, advertised as an original-owner car. The online information indicated that the car was located in Oregon, but the contact phone number was a Chicago number. Tony called and found himself talking to the owner’s son. The car really was in Oregon, and the seller’s father really had purchased the car new. He and his wife were married in the car and had driven it for decades, before storing it in their garage. “In 2010, the owner attempted a restoration with hopes of getting the car back on the road so that he and his wife could drive it again,” Tony said. “Sadly, his wife passed away before the project was finished, and he stored the car, in pieces, back in the garage.”

Tony says he knew he was taking a chance when he agreed to buy the car without seeing it or knowing much about it—but it was a chance he was ready to take. He drove from Southern California to Oregon to see the car he’d already paid for. “Less than 24 hours later, the car was in my garage for the start of its restoration.”

The restoration is not a replication of the car’s factory stock condition. Instead it’s a combination of modifications that upgrade it appearance- and performance-wise without departing from its original identity. The first look provides a pretty good idea of that restomod style of hot rodding. The exterior lines and proportions are stock, and all hardware and trim pieces are intact. That trim was in very rough shape after half a century, Tony told us, but he’s proud that every original piece has been retained—carefully restored and then refinished by Custom Chrome. The door handles and bumpers are also original pieces. A few of the mild mods include the HID headlights, LED taillights, and the custom tinted glass. The only cuts are where the NASCAR-style exhaust tips exit just forward of the rear wheel openings.

The wheels and tires are the other departure from stock. Some of you might prefer to see 14-inch rims and a lot of rubber sidewall, but to our eyes, Tony’s choice of 20- and 22-inch Esajian Slingshot forged five-spokes and low-profile 245/35ZR20 and 265/35ZR22 Lexani performance tires are more proportional and promote the modern hot rod theme.

When considering paint, Tony had always been leaning toward a neutral color and had purchased a paint color he called “beer can silver.” At the last minute, with the Impala already in the spray booth, he saw this deeper color and called the painter, Joshua Franklin at California Auto Worx, to request a change. Franklin sent a photo of a sprayed panel to Tony’s cell phone, and Tony told him “Go for it!” The chosen color, Galaxy Gray from House of Kolor, is contrasted by glossy black accenting the Esajian wheels.

The body rides on the original frame, which was beefed up with additional supports, primered, powdercoated, and cleared. Tubular control arms, antiroll bar and ShockWaves from RideTech, and spindles from CPP upgrade the front suspension—and provide that aggressive rake you seen in the profile photo. The factory rearend, with 3.90:1 gears and a limited-slip differential, is suspended with springs, tubular shocks, an antiroll bar, and a Panhard bar from RideTech. Tony installed Wilwood disc brakes all around, 13-inch/six-piston brakes in front and 11-inch/four-piston brakes in back.

Tony is glad to be running the original numbers-matching 348 W-Series V-8 engine with Tri-Power induction, “the way they were raced in 1959,” as he says. James Vermillion in Riverside, California, did the assembly on this engine. The Tri-Power setup uses the factory Rochester 2 Jet carbs and GM manifold, underneath a K&M air cleaner. The stock heads are topped with Edelbrock 348/409 W-Series valve covers. Doug’s Headers feed the exhaust to 2.5-inch Borla exhaust pipes terminating with the NASCAR-style Dr. Gas Boom tube tips with integrated mufflers. A pair of Spal electric fans pulling air through the Fluidyne aluminum radiator, plus an Edelbrock water pump, keep the engine temps where they belong. Backing up is 348 is a GN 700R4 transmission with a TCI torque converter.

Stock 1959 Impala style continues into the interior, but as with everything else, Tony wasn’t going for a restored inward appearance. The restomod style he wanted is evident all over, particularly in the black leather upholstery with OEM factory inserts, designed and applied to the original seats by Aaron’ Auto Interior in Riverside, California. The door panels and trunk got some of the same treatment, a great touch the factory didn’t do 62 years ago. Tony pulled out the air conditioning and heater controls and replaced the original instruments with Dakota Digital’s 1959-1960 Chevy Impala gauges from the VHX series. A Billet Specialties steering wheel tops a Flaming River column. Vermillion installed the wiring using a Ron Francis kit. The trunk houses an audio system way beyond anything available in 1959, including a JL Audio receiver, with Focal speakers located discreetly in the interior.

Tony has been enjoying driving his ’59 Impala, maybe as much as any NASCAR car. He has also entered it in car shows, back when people used to do that. We’ll finish this story with one of Tony’s most memorable car show moments, as he told us. “While at a car show in Riverside, I had an unexpected visitor looking over my car. I began to talk to the person and immediately realized that I was talking to Chip Foose. He complimented the way the car was designed and built. I knew that I had built a nice car, but hearing it from him certified our build.”

Photos by Jorge Nunez. This article originally appeared on HotRod.com.