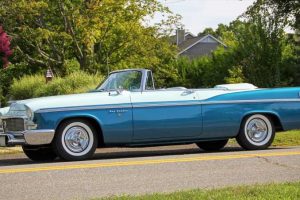 Decades before the Chrysler New Yorker became a badge-engineered model thanks to the LH platform used by the likes of the Eagle Vision and Dodge Intrepid, as well as the Chrysler LHS and Concorde, the New Yorker was a large and luxurious V8-engined yacht. The nameplate itself dates back to the variants of the Chrysler Imperial lineup of the 1940s, but by the late 1940s the New Yorker had become its own distinct model, though it still shared mechanicals and some bodywork with DeSoto designs.

Of course, that was back when Chrysler still offered convertibles. Now it does not, and neither does Dodge.

But even in the distant past, some Chrysler convertibles were rarer than you’d think. This 1956 New Yorker design, for example, saw only one model year of production, with just 921 examples leaving the factory. Designed by none other than Virgil Exner borrowing cues from the 1952 Imperial Parade Phaeton show car, the 1956 model year New Yorker convertible featured an expansive grille, two-tiered headlights and gently-rising tail fins. Power came courtesy of Chrysler’s 354-cid V8 coupled with a Powerflite push-button three-speed automatic. 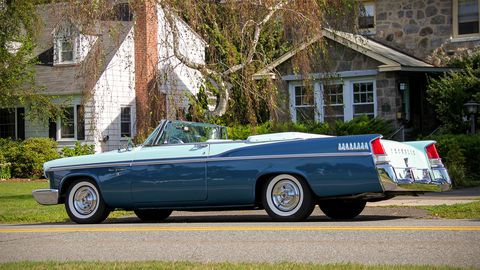 The design lent itself well to two-tone paint schemes, and there were a couple options available with an upper and a lower color, with fins continuing on in the lower body’s color, or one solid color for the upper and lower body but with fins and side moldings stretching to the headlights in a contrasting color. The interior was two-tone as well, and incorporated a mix of colors, with contrasting trim on the seats and even on the steering wheel’s five and eight o’clock positions.

This New Yorker probably looks more familiar from the back than it does from the front. That’s because while the front-end styling changed almost every year in the second half of the 1950s, the rear fascia largely stayed put. So you’ve probably seen the later model year cars with the high-set twin headlights and much wider eggcrate grilles—the ones that look like Imperials of the era. The DeSoto Firedome, Adventurer and Fireflite models—also ridiculously rare these days—had a very similar appearance in the late 1950s with the twin-headlight look. 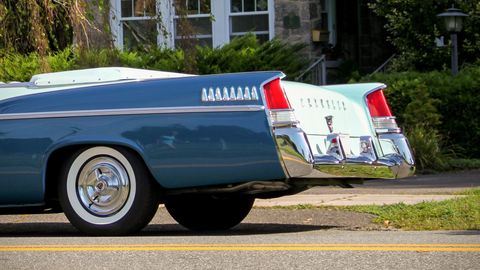 Speaking of DeSoto, this particular 1956 Chrysler New Yorker had a DeSoto twin as well in 1956, the Fireflite convertible. Quite a bit of the design was similar, but the DeSoto sported a different, half-oval grille. But the resemblance is certainly there. (We don’t even want to guess how many of those DeSoto Fireflites are still around).

Even though the New Yorker convertible was a special car even when it was new, time had not been to the 921 examples produced. Now, just 24 examples are known to survive, and from time to time they make appearances at the top concours events in the country. So it was quite surprising to just see one parked on the street, given the belief that just 24 examples of this car survive.