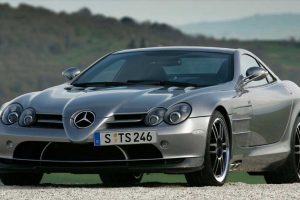 Cast your mind back to 2002. Covid-19 wasn’t anything to anyone, Elon Musk was only known for creating PayPal (and, after selling it, buying a McLaren F1), and Porsche, Ferrari, and Pagani were setting the automotive world alight with the Carrera GT, Enzo, and Zonda. It was one heck of a time to love cars. But there’s another, oft-forgotten member of the early 2000s supercar aristocracy: the Mercedes-Benz SLR McLaren.

Born out of a partnership between Mercedes-Benz and McLaren that started with their joint Formula 1 program, the SLR was both an homage to the old and an exploration of the new. The McLaren F1 had been out of production for several years, and the new McLaren Automotive outfit that would eventually produce the MP4-12C road car wasn’t yet a glimmer in Ron Dennis’ eye. So at the 1999 North American International Auto Show (NAIAS), Mercedes-Benz and McLaren proudly hosted the reveal of the Vision SLR, a concept inspired by the Mercedes-Benz 300SLR Uhlenhaut Coupé, a roofless version of which Sir Stirling Moss piloted on his record-setting run of the Mille Miglia.

The concept was a carbon-fiber-clad slice of the future powered by a 5.0-liter supercharged V-8. Long, low, wide, and looking as though it was hewn from a single, car-sized ingot of silver, it was an instant hit. Mercedes then turned to its Formula 1 partner, McLaren, to help develop the production version of the Vision SLR. Thus the Mercedes-Benz SLR (Sport Licht Rennsport, or Sport Light Racing) McLaren was born.

A handful of changes were made to the bodywork in the transition from concept to road car, but it retained its front-mid-engine layout and elegant shape. A carbon-fiber tub was used for the cockpit, which was bonded to an aluminum subframe that cradled the all-aluminum supercharged 5.4-liter V-8 that made 617 hp and 580 lb-ft of torque. Carbon fiber was also used for every body panel of the SLR, and it was one of the first production cars to feature carbon-ceramic brakes that Mercedes claimed would resist fade up to temperatures of 2,200 Fahrenheit.

Mated to that mighty V-8 was a transmission that received more than its fair share of criticism from the automotive media. It was “just” a five-speed torque converter automatic. Dual clutches weren’t quite ready for the world yet, and most said this super-GT should have had a slick manual like the one in the aforementioned Porsche Carrera GT. Looking back, however, and the five-speed perfectly suited the long-legged, continent-crushing GT credentials of the SLR.

Small but wonderfully nerdy details abound. The brake lights would glow at twice their normal intensity under hard braking to warn the drivers behind. There was a sensor that measured the angle, luminosity, and intensity of the sun’s rays just to make sure the HVAC system could keep the cabin as comfortable as possible. The single-piece carbon-fiber seats were placed low in the car and set to exactly 28 degrees to make sure the resulting driving position was both sporty and comfortable.

At the time its 208 mph top speed made it one of the fastest cars in the world. It was a feast for both stat nerds and art lovers alike. Despite its incredible straight-line performance and incredible looks, the ride was a bit on the harsh side. That’s because the SLR was suspended by conventional springs and dampers—no adaptive shocks or air suspension to speak of. Simpler and more reliable than air suspension, and perhaps lighter than adjustable dampers … perhaps Mercedes and McLaren made the right call. The adaptive damping technology we have today would have made a world of difference, though.

Over its six-year production run, a total of 2,157 cars were built at McLaren’s Technology Center in Woking, England. The coupe was followed by a roadster called the 722 Edition, its 722S convertible counterpart, and the roofless, windshield-less SLR Stirling Moss speedster built to honor Sir Stirling Moss and his 300SLR from the 1995 Mille Miglia. It was a technological tour de force that managed to be alluring, futuristic, and beautiful all at the same time. So why, in the annals of automotive history, is the SLR seemingly lost?

Maybe that’s because the SLR has been misunderstood by many since the beginning. Infighting between Mercedes and McLaren on what the SLR was supposed to be led to split development philosophies. Mercedes reportedly wanted something luxurious and comfortable and McLaren wanted a lightweight driver’s car. Those two typically don’t mix, and the different approaches only meant the SLR’s original target price of around $200,000 more than doubled by the time development was over. While that put it in the same stratospheric price category as the Enzo, Carrera GT, and Zonda, the SLR was never supposed to be a rival for those cars. From the outset, the SLR was to be pitted against the likes of the Ferrari F430, Bentley Continental GT, and Aston Martin DB9.

The result was a car whose performance was leaps and bounds beyond the Bentleys and Astons of the time, but one with a price tag that left it in some much more hardcore company. So when you look back on the SLR, take its original selling price out of the equation and think of it as a super-GT—one of very few from that time—and not some world-beating hypercar that was supposed to take down the Enzo. Then and only then will the SLR get the respect it deserves as one of history’s great supercars.