Home » Classic Cars » The VW Scirocco GT Is Handsome, Fast And Costs Only £5,000

The VW Scirocco GT Is Handsome, Fast And Costs Only £5,000 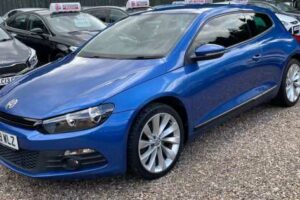 The Golf GTI is the VW product we most closely associate with performance, followed closely by the R version of the company’s ubiquitous hatchback. The reveal of the updated Jetta GLI reminds us that there are others, however. Others like the Scirocco.

The Scirocco was around too long for its own good, with the car’s MkV Golf underpinnings looking positively geriatric towards the end of its life, with the borrowed platform nearing 15 years old. And yet, we were still sad to see it go when the plug was pulled around four years ago. These days, its vacated spot on the production line at the Autoeuropa plant in Palmela, Portugal is occupied by the T-Roc rather than a like-for-like replacement.

The entry-point to the original lineup was a 1.4-litre inline-four producing a mere 122bhp, but you could – thankfully – also spec a 2.0-litre ‘EA888’ TSI with a far handier 197bhp. This dropped the 0-62mph under seven seconds, giving the sort of performance that backed up the curvaceous, ‘coupe’ bodywork.

A 261bhp R shortly followed, curiously using the older belt-driven ‘E113’ rather than the chain-driven EA888 of the GT. You’ll still need upwards of £10,000 to buy an R, so the subject of today’s classifieds trawl is instead the far cheaper GT. And they are indeed a lot less – we’ve seen some higher mileage cars going for as low as £4000, which isn’t a great deal more than you’ll pay for the far more ordinary-looking MkV Golf GTI.

This 2009 example is up for sale on Autotrader for a very reasonable £5,299. It’s done 104,185 miles, which is a tad more than some others we’ve seen in this price bracket, but that figure doesn’t trouble us too much. It sounds as though the service history isn’t quite complete, with nine stamps in the book and no mention of any other evidence of work. It’s worth asking for more information if you do end up calling.

The advert’s pretty light on detail, with 95 per cent of the description being a copy-pasted bunch of text about how many cars the dealer has in stock, finance services and other things that don’t interest us. Happily, there are plenty of photos, showing decent bodywork finished in Rising Blue, a tidy full leather interior, and 18-inch wheels that have escaped any serious kerb damage. The latter also have a full matching set of tyres, and good ones at that – Michelin Pilot Sport 4s. Result!

As the car industry moves away from three-door cars (VW itself no longer makes three-door versions of the Polo and Golf), the Scirocco is becoming more and more tempting. Prices will continue to drop, of course, but £5k or so seems like great value for what you’re getting.