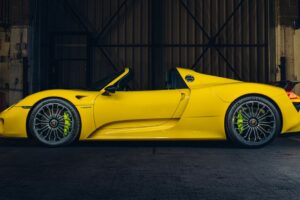 If told to picture a 918 Spyder in your head, we’d put money on it being one finished in a low key hue like Metallic Silver. It’s this shade Porsche predominantly used for the original press pack, and the 918 on the company’s heritage fleet is finished thusly too. Do a Google image search for the car, and you’ll see a lot of Metallic Silver and other subtle colours dominating proceedings.

The finish on this particular 918, though? It’s far from subtle. It’s one of a small number of the 918-unit production run to be daubed in Racing Yellow, and it certainly pops. It definitely makes you look upon what was considered the most demure of the much written about ‘Holy Trinity (completed by the McLaren P1 and Ferrari LaFerrari) in a different light.

The Porsche was arguably the most unique of the three, though. The McLaren shared a lot in common with the ‘lesser’ 12C, and the Ferrari used a derivative of the F140 V12 engine that’s still in production today. But the 918? It received a 4.6-litre flat-plane V8 which was a lightly watered-down version of the engine found in the RS Spyder LMP2 racer. It was to power the 918, and the 918 only.

The 918 was the only one of the Trinity to set a publicly known Nurburgring lap time, with McLaren never revealing an exact figure for its P1. The Porsche rounded the Nordschleife in just 6min 57sec, a record at the time as well as being the first production car lap under seven minutes. These days the production lap record seems to be broken every few weeks, but the 918’s time stood for years before being usurped.

The Spyder we’re looking at today is number 238, delivered new via Porsche Centre Hong Kong in early 2015. The owner decided in 2019 to bring the car to his home in the UK, with it receiving the four-year ‘major’ service the same year via Porsche Centre Reading. The mileage currently sits at just under 1450.

We’re a little unsure about the mixing of Acid Green brake calipers with the Racing Yellow bodywork, but hey, it’s certainly an attention-grabbing look. Inside there’s black leather trim mixed with Acid Green contrast elements, heaps of carbon fibre and a Burmester sound system. In all, there it has 20 (no doubt all very expensive) factory options.

Before adding extras, Porsche charged £781,000 for these things in the UK. This 2015 example is comfortably more than that figure at £895,000. So, not exactly a bargain, but if you’ve vast quantities of money to spend on a hypercar, we’re not sure any brand new six or seven figure options are anything like as interesting.