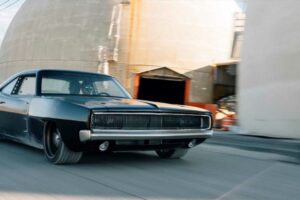 With the latest Fast and Furious rolling out into theaters this week, the folks at SpeedKore wanted to show off the road-going version of Dominic Toretto’s F9 ride. For those unfamiliar with the Fast and Furious franchise, Vin Diesel’s character, Toretto, has an affinity for over-the-top Dodge Chargers. If you’re in the market for wild muscle cars, namely ones bearing Mopar badges, SpeedKore is the place to go. And, considering this Charger sports a mid-mounted Hellcat engine, the company didn’t pull any punches.

That’s right, this 1968 Dodge Charger sports a 6.2-liter Dodge Hellcat engine mounted behind the driver. Fitting the engine meant SpeedKore had to build a custom frame. While the mid-mounted Hellcat engine might be impressive enough to get attention at SEMA or at your local car show, SpeedKore doesn’t stop there.

If you’re familiar with SpeedKore, and the company’s parts offerings, this probably isn’t a huge surprise, but the car’s body is made out of carbon fiber. That’s a not only an impressive feat of craftsmanship, but it’s also just genuinely an interesting approach to classic car customization.

Of course, with a name like “Hellacious,” you’re probably expecting the car to carry plenty of suspension and braking goodies, too. Stopping the custom Charger is a set of Brembo brakes, with six-piston calipers up front and four-piston calipers at the rear. Drifting is a must, so there’s a hydraulic handbrake, too.

This Charger is perfectly over the top, and nothing short of what we’d expect Toretto to wheel at this point in his fictional career. We’re also excited that SpeedKore looks to have knocked this road-going beast out of the park.

You can see the movie at any major movie theater today.

Do you think this mid-mounted Hellcat-powered Dodge Charger is the best Fast and Furious car yet? Let us know your favorite below.