Home » Electric Cars » 2021 Volkswagen ID.4 Is for the Early Majority Among Us

2021 Volkswagen ID.4 Is for the Early Majority Among Us When new tech comes around, adopters are generally broken down into five categories: Innovators, Early Adopters, Early Majority, Late Majority, Laggards; according to On Digital Marketing.

First: the innovators. The innovators take risks, are young, have money, and in close contact with other innovators. Next are the early adopters. These were the folks buying electric cars 10 years ago. Now, I think, we’ve come to the meat of the bell curve, the early majority, and that’s where the 2021 Volkswagen ID.4 comes in. It’s one of the most regular looking, and acting, EVs on the market.

Let’s start with the looks. The ID.4 is bigger than we expected from seeing it in pictures. Ballpark, I’d put it at Ford Escape size, but lower and cooler looking. It’s definitely not just a big Golf. The lines are sleek and the rear looks like a modern car, but the front gives away the tech. Besides the LED headlights, there’s a light strip across the front, two blocked-off side intakes and one large center intake that does let air in. The door handles are flush, with just a little indent to get your fingers in, and the 20-inch wheels look huge.

Despite the large wheels, the ride is comfortably soft. Similarly, the steering is easy and, I would say, on the slower side to react. It does feel sturdy with the motor in the back, powering the rear wheels only. And the battery is mounted underneath the floor, giving it a low center of gravity. The suspension is common as well, with a MacPherson strut front and multilink rear. It’s turning radius is only 33.5 feet, but it didn’t feel as nimble as I expected. That’s partly because I was expecting a smaller vehicle. 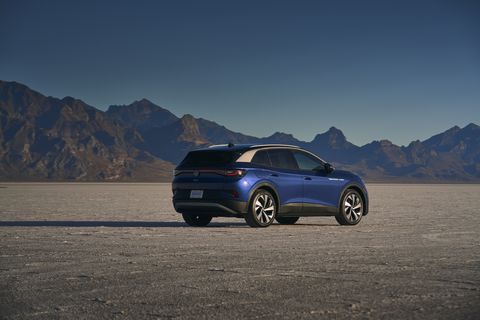 But instead the VW ID.4 sits squarely in the middle of the compact SUV segment, size-wise. It is 4.6 inches shorter than the Volkswagen Tiguan, at 180.5 inches, and 1.9 inches lower than Tiguan at 64.4 inches high for the rear-wheel drive model. Speaking of, a more powerful all-wheel drive version is coming next year with more power and a smaller motor up front powering those wheels.

The now-official range is 250 miles and on a fast charger it can regain 80 percent of that in 30 minutes. The first ID.4s will come in rear-wheel drive configuration only, with the rear-mounted 201-hp, 228-lb-ft AC permanent-magnet synchronous motor mounted between the rear wheels. The AWD version will sport 302-hp.

And the ID.4 feels like it has 201 hp. It’s not slow off the line, but it isn’t as quick as many of these new electric cars are, but that’s how you get range with a midsized crossover. It feels quick from a standstill and cruises nicely at 80 mph down the expressway, though passing power at that speed is a less than I like.

When it’s time to slow down, the brakes feel flimsy and soft, without any real stopping power until you get two-thirds the way of pedal travel. You don’t actually need to use them that much in “B” mode, where VW ups the automatic regenerative braking to slow you down immediately after you let off the throttle. Here it can be driven almost entirely with one pedal. I still love timing the slowdown to land right at a stoplight or stop sign without hitting the brake until the last moment. It still does have some creep (when you let off the brake it starts to roll forward), but not much. If you’re waiting for an electric car to stoke your inner wheelman, this ain’t it. But it’s still a hell of a good vehicle. 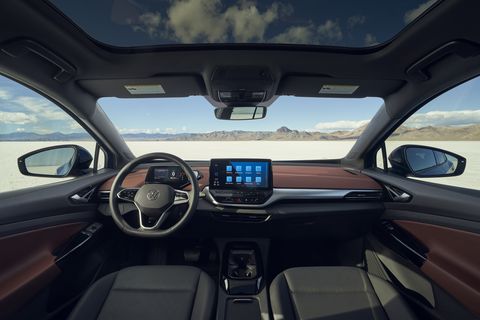 Inside, we have exceptionally comfortable perforated leather seats with a massaging function, a leather-wrapped wheel, two screens and little else. It has a light across the dash that will remind you of Amazon’s Alexa when the infotainment is “thinking.” Underneath the main screen are the climate controls with hard buttons for modes and such.

Many of the controls use the swipe motion, including the sunroof. Just put your finger on the panel, slide it back, and the cover rolls out. Slide it back again and the roof opens.

There’s a lot of rubberized plastic in the front, but that’s okay. Both the backseat and trunk are huge—think two kids and a bunch of luggage huge. Like I said earlier, the ID.4 is bigger than it looks in pictures.

It starts at $39,995 before tax credits, which means it could get down to the low $30K range, and that’s a good deal for this rear-wheel drive, not very sporty, EV. Mid next year an all-wheel drive version is coming with the same motor in back and a smaller motor up front. It’ll bring 100 more hp too.

The next round of EV buyers will be the late majority, and probably more customers for VW. “The late majority kicks in only after a product is well established and it has a more skeptical approach to technological innovation and it feels more comfortable in the adoption only when a product has gone mainstream.” By that time most of that bell curve will be filled with EV drivers. The last segment of people are called laggards. While the late majority person is skeptical of technological innovation, the laggard is adverse to it.

The key with the VW ID.4, on sale in March, is that getting an electric car is not just a fringe move for innovators, or even early adopters, anymore. Any household with more than one car could have an EV in the garage without changing habits one bit. I’m not saying this is THE one, but it’s one of the ones, and it’s in a meaty segment with tons of sales. We expect it to do well.

END_OF_DOCUMENT_TOKEN_TO_BE_REPLACED

END_OF_DOCUMENT_TOKEN_TO_BE_REPLACED
We and our partners use cookies on this site to improve our service, perform analytics, personalize advertising, measure advertising performance, and remember website preferences.Ok