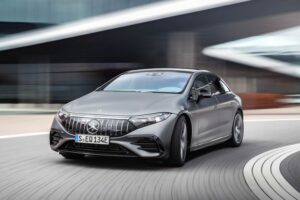 We knew we wouldn’t have to wait long after the debut of the Mercedes-Benz EQS to see the AMG version, and the automaker’s in-house tuner from Affalterbach promptly obliged before we even got to see the standard EQS stateside. Revealed just ahead of the formal start of the Munich IAA this week, the Mercedes-AMG EQS 53 will be the performance version of Stuttgart’s electric flagship, promising a maximum of 751 hp and 752 lb-ft of torque.

The AMG version borrows the standard sedan’s mammoth 107.8-kWh battery pack, but adds motors of its own design, giving the front- and rear-axle motors of the EQS 53 new windings, new actuation via inverters with distinct software, and stronger currents. AMG has also beefed up the cooling system complete with a water lance in the shaft of the rotor, in addition to a needle-shaped pin-fin structure on the inverter itself, composed of high-performance ceramics, as well as special ribs on the stator. Even the battery itself has received AMG-specific bits, including new wiring adapted to high-performance capacity, and a reconfigured battery management system.

The result is a standard output of 649 hp and 700 lb-ft of torque, when optioned without the AMG Dynamic Plus package. But with it, the sedan dials up the power to 751 hp and 752 lb-ft of torque in Race Start mode, serving up a 3.4-second launch time from 0 to 62 mph. 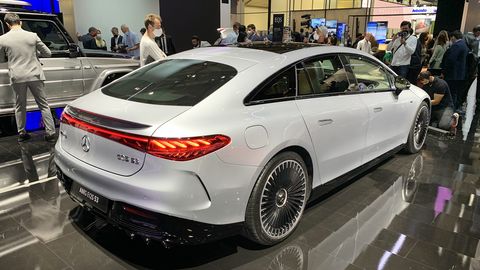 To cope with this power AMG has beefed up the brakes accordingly, with a choice of standard 16.3-inch discs, or the optional 17.3-inch discs up front. A new i-Booster function will pair the car’s recuperative braking with hydraulic braking to prevent all that energy from going to waste.

“The AMG EQS 53 4MATIC+ is the first all-electric ambassador in the performance segment, made in Affalterbach,” said says Philipp Schiemer, chairman of the Board of Management of Mercedes-AMG. “It is tailor-made for car enthusiasts who are looking for a combination of innovative electric mobility in a luxurious ambience, coupled with sportiness and agile driving dynamics. With our first all-electric AMG vehicle, we will undoubtedly appeal to and win over a new clientele for Mercedes-AMG.”

Just how will people be able to tell that you’ve bought the AMG version?

For starters, the EQS 53 will get a black grille and a distinctive wheel design, along with a slightly larger rear spoiler. But aside from that, unless you look inside and see the AMG seats and a few other exclusive details, the AMG version will remain relatively low-key. Mercedes’ massive Hyperscreen will be standard, of course, since you’re going to be checking a lot of the option boxes anyway and spending accordingly.

Curiously enough, the AMG Dynamic Plus package that will include the Race Start mode—with the boost function and three selectable sounds dubbed Balanced, Sport, and Powerful, along with dynamic—will not be standard item but rather an option. This means that in order to get the boost to 751 hp, you’ll have to check that box and pay a bit extra if 651 hp isn’t enough for your daily commute.

And indeed, there will be three sounds to choose from when you want the people outside to know just which version of the EQS you’ve purchased. 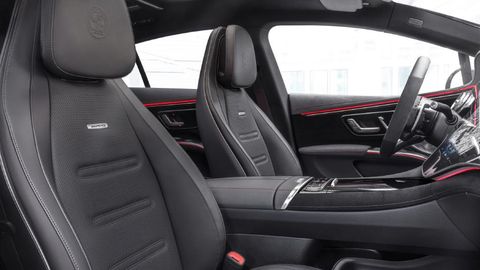 “The EQS 53 4MATIC+ brings a new, powerfully sonorous sound to electric driving. Its sound system uses special loudspeakers, shakers, and a sound generator to create a special sound experience in two versions: ‘Authentic’ or ‘Performance,'” the automaker says. “This exclusive AMG Sound Experience is generated inside and out with a tonality and intensity to match the current driving status, the selected driving mode or the driver’s wishes.”

In other words, you won’t get a V8 or V12 underhood, but you will get some mean sounds.

AMG has also revised the available driving modes accordingly, omitting the Eco option from the standard sedan and offering Slippery, Comfort, Sport, Sport+, and Individual modes, each with their own distinct settings, covering everything from braking and steering to the workings of the cooling system.

We think we know what you’re thinking at this point: Just how many other versions of the EQS could there be?

An extra-long-wheelbase version for China, an armored Pullman version for heads of state, or a two-door cabrio to soak up the sun? It’s safe to say there’s no Guard version for the US in the works because a large number of those cars are sold in markets where gasoline will be dominant for quite some time, but we wouldn’t rule out coachbuilders stretching the EQS by about a foot or so to buy it some extra legroom—for the right dollar number.

Speaking of numbers, one number that may remain unknown for some time until the model gets ready for its stateside debut is just how much range will be sacrificed in the name of performance. We have a feeling a few miles will be lost on account of the higher output. The standard model is rated at 478 miles in the WLTP cycle in Europe, which will likely land it just below the 400-mile mark in the EPA cycle, but the only figures for the AMG version that we have at the moment stretch from 326 to 360 miles in the WLTP cycle. Just where that gets us on the EPA cycle is still up in the air, so we wouldn’t get too attached to any of these numbers.

The AMG EQS will go on sale stateside next year as a 2023 model.