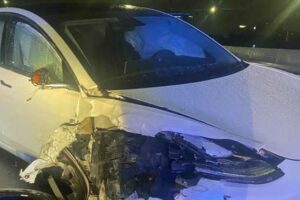 A 2019 Tesla Model 3 crashed into the back of a police car and a Mercedes-Benz SUV on Interstate 4 in Orlando, Florida, on Saturday. The crash happened at 5 a.m., when a Florida Highway Patrol vehicle stopped to assist a disabled Mercedes-Benz GLK350 on the side of the interstate. The state trooper escaped injury, having been outside the parked Dodge Charger police car, with the Model 3 striking the left side of the police car and the front of the Mercedes.

The driver of the Tesla told troopers that she had been using Tesla’s Autopilot driver-assist system. Florida Highway Patrol posted photos of the aftermath of the crash on social media, showing a damaged police cruiser and Tesla sedan, and indicating a glancing impact that nevertheless inflicted heavy damage to all cars involved. All individuals escaped injury in the crash, with the Florida Highway Patrol currently investigating the incident.

The latest Tesla crash into a first responder vehicle comes just two weeks after the National Highway Traffic Safety Administration opened an investigation into 11 instances of Tesla drivers hitting parked emergency vehicles while using the Autopilot driver-assist system in the US. The incidents date back several years and follow a surprisingly common pattern: First responder vehicles, including police cars and fire trucks, stop to assist disabled vehicles on road shoulders or traffic lanes, using emergency lights to direct traffic around them, as Tesla vehicles with Autopilot engaged collide with them either with or without attempts by the driver to brake in the seconds prior to impact. Some crashes have resulted in serious injuries, as they happened at highway speeds.

Happening now: Orange County. Trooper stopped to help a disabled motorist on I-4. When Tesla driving on “auto” mode struck the patrol car. Trooper was outside of car and extremely lucky to have not been struck. #moveover. WB lanes of I-4 remain block as scene is being cleared. pic.twitter.com/w9N7cE4bAR

In the years since Autopilot has been offered in Tesla vehicles, the feature has been criticized for a lack of an effective driver monitoring system (DMS), as well as the ease with which some users have been able to bypass the few driver attention sensors, allowing cars to operate in traffic without a driver in the seat. Tesla requires drivers to remain alert during Autopilot use and monitor the traffic ahead, and to keep their hands on the steering wheel, even though in practice some users do not heed these warnings.

“Current Autopilot features require active driver supervision and do not make the vehicle autonomous,” the automaker says on its website.

The crash also comes a little over a week after two US Senators wrote a letter to the Federal Trade Commission to ask it to investigate Tesla’s marketing practices in relation to what Tesla calls Full Self-Driving, which has generated plenty of its own controversy despite having been on the market for a much shorter period of time. The Senators have asked the FTC to investigate how the system is marketed to buyers, and its claims of offering self-driving capabilities, despite Tesla’s fine print and admission to regulators that it is not capable of self-driving.