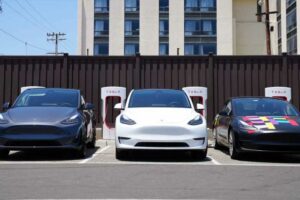 Autonomy, the largest electric vehicle subscription company in the United States, has announced the expansion of its EV lineup with the Tesla Model Y Long Range.

The company, which launched its EV subscription service at the end of January 2022 with a fleet of Tesla Model 3 Standard and Long Range vehicles, says that customer demand has driven it to expand the fleet with the Model Y LR, which is now being delivered to it at a rate of 200 per week.

“During the first quarter of the year, Tesla made up 75% of EVs sold, with Model Y and Model 3 making up 68% of the market by themselves, showcasing the demand and popularity for the vehicles. We’re seeing five times the demand we anticipated for our Tesla Model 3 program, and with gas prices soaring, we knew it was time to expand our lineup to include a popular crossover, such as the Model Y.”

Through its mobile app, Autonomy says it provides a low-commitment and cheaper alternative to getting into a Tesla Model 3 or Model Y, without having to wait months and go into long-term debt.

The subscription contract’s terms include a duration of minimum three months, after which the user can terminate it at any time with 28-days’ notice. All subscriptions include basic routine maintenance and roadside assistance.

The company currently has 1,000 vehicles in its fleet (mostly Model 3s) and plans to grow to around 3,000 by September. That said, Autonomy has revised its target to have 10,000 Teslas in its fleet by the end of the year to 6,000 vehicles.

Autonomy CEO Scott Painter told Electrek that it plans to buy electric vehicles from other companies as well, mentioning a massive order of 23,000 EVs from other startups and legacy automakers. The executive mentioned names like Rivian, Lucid, Polestar and Canoo, as well as GM and Ford. The company will reveal the full order of 38 different EVs next month.