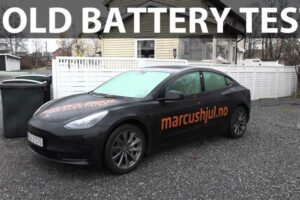 We already know that its winter range (at 1°C) is noticeably lower than in the Summer. But it was a test with a normal battery temperature (roughly 25°C).

The next episode is about how the cold weather affect the Tesla Model 3. The car was left intentionally with a low state-of-charge and the battery had only a few degrees °C in the morning (outside temperature was 2°C). We can treat it as the worst-case scenario.

The EV battery packs are thermally isolated so they maintain temperature quite long.

The general operation of the car is surprisingly good and it appears to accelerate normally Regenerative braking is ok (it can reach substantial levels – up to a few times higher than continuous fast charging).

However, the fast charging is significantly limited when the battery is cold. After plugging-in, the car was able to barely reach 20 kW at about 11% state-of-charge (SOC), and then it decreased to an even lower level, like 13 kW (after 10 minutes).

This proves that the battery temperature is crucial for charging. Fortunately, the pre-conditioning of the battery (heating) ahead of fast charging (car feature), combined with driving (additional heat losses and heat scavenging) improves the charging performance relatively quickly.

The later test at 8% SOC with 25°C battery temperature resulted in charging power of 111 kW (and it dropped to 90 kW after a while).

The conclusion is to avoid leaving the cars in the cold, disconnected from a charging point, and if that happens, maybe start conditioning immediately to achieve best performance and fast charging capability.

Anyways, regardless of the issues that cold has on all technical devices, the perspective of owning an EV appears much better than owning an ICE and starting a cold internal-combustion engine every morning.