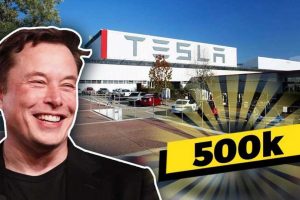 Tesla beat the odds and delivered 500,000 cars in 2020. Can it honestly double that number this year?

Tesla officially released its final 2020 production and delivery report. Surprisingly, at least to some, the company delivered a whopping ~500,000 cars in one of the most difficult years our country has ever seen. What does the future hold?

Every time a company hits a milestone, the focus shifts to what lies ahead. Can Tesla deliver 1 million cars in 2021? Should the company even suggest an attempt to do so?

Tesla’s growth story is truly amazing, and it has only just begun. The automaker’s next goal may be to deliver 1 million cars in a year. However, 2021 may not be the year to focus on. This is because Tesla is currently expanding factories and building additional factories across the globe. It has plans to significantly ramp up its production and delivery efforts in the coming years. But, for now, Tesla only has two working factories, which arguably makes one million annual deliveries seem like a tall order.

In a few years, when Tesla has two fully functional factories in the US, potentially a battery factory on our shores as well, and at least two working factories overseas, huge growth seems imminent. 2021 stands to be a major transitional year in Tesla’s growth story. Still, Tesla owner and data expert Ben Sullins takes a look at the odds of Tesla delivering 1 million cars this calendar year.

Before you watch the video above, what do you think? We’d love to know your 2021 Tesla production and delivery estimates. This way, in a year, we can look back to see who was right.

At InsideEVs, we’ve stopped estimating Tesla deliveries. There are too many variables involved, which makes it a very difficult task. In addition, unless you’re a Tesla investor, the delivery number doesn’t really matter. We care not about Tesla stock, the company’s value, or the number of cars it can/will deliver, but instead about the vehicles themselves.